Match Type: I Quit:
Anything goes, match does not end until one fighter forces the other to verbally shout the words "I QUIT"
Hidden Stipulation 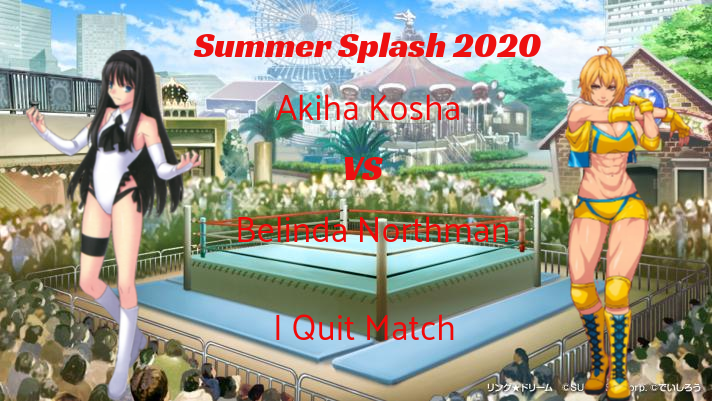 This was it, it was time for Akiha to end this rivalry with Belinda.  The two of them had been going at it for years.  But now they were going to have an “I give up” match.  Akiha did feel she had the advantage, as she had never given up or tapped out once while the same could not be said for Belinda.  Still, she knew this was not going to be an easy fight, Belinda wasn’t her rival for a reason.  The crimson hair wrestler would take a moment to think about all the matches she had done with Belinda, the wins and losses.

The Crimson hair wrestler would then take a moment to check her uniform.  With everything else ready she would make her way to the entrance towards the ramp.  Akiha theme song would play but when she showed up, she was being carried in a Japanese style shrine, being carried by what looked like four female Japanese shrine maidens.  Akiha would have her eyes closed as she was brought to the ring.

“Being brought to the ring, stand at 5’4 and weighing 120 pounds, the Japanese Crusader, Akiha Kosha.” stated the announcer as the audience would boo.  But the Crimson hair wrestler would not let it get to her.  Instead, she remained calm and unmoved by it all.  Once her entourage reached the ring, they would bring the shrine down and with that Akiha would exit the shrine and make her way towards the steps, before entering the ring.  The Japanese wrestler then made her way to the turnbuckle and awaited the arrival of her opponent to show up.
_________________

If Belinda was honest, this wasn't exactly a match she was 100% sure about. She had a pretty rough stipulation hanging over her head and she was facing against her arch-rival. Akiha had been her rival for so long now and they'd gone back and forth so many times and it had always been down to the wire.

Belinda was dressed in her usual uniform, adorned in yellow and blue as she stepped out onto the ramp. " And her opponent. Standing at 5'7 and weighing in at 137 pounds.....The shooting Star! Belinda Northman!" The Announces called out as Belinda would head down the ramp, to the cheers of the crowd. She made her way towards the ring as she waved towards the crowd. Stepping up into the squared circle and making her way to center of the ring as she would give Akiha a serious glare, staring down her crimson haired rival.
_________________

Akiha watched as Belinda made her way down to the ring. She had expected something a bit more from her opponent instead of just a regular entrance. Well then, she waited as Belinda got into the ring and glared at her as the two of them had a staredown. Akiha though after a moment would make her way to the center of the ring. "I had expected a better entrance from you, especially seeing what kind of match we are having. Though I guess I shouldn't expect much from a foreigner then you. I shall show you and everyone else the way after I win this match." stated Akiha in a confident tone. She would then wait for Belinda's response.
_________________

Belinda would watch Akiha make her way to the center of the ring and join the blonde, before she started to complain once more. " It's a special type of entrance for me. Unlike my usual run towards the ring and leap...I chose to do one more like I used to, back when we first faced off." Belinda let out as she would keep a firm glare going with her rival.

" Much like our first match...this match, our last one will end with my victory." Belinda spoke out as she would raise her arms up, stepping back a step or two as she would then wait for the bell to ring. " Out of all of my opponents...you're the only one that can annoy me this match before the match has even started though." Belinda joked a bit as she kept her glare going with Akiha.
_________________

Akiha would give a smirk at Belinda's comment. It was true, usually, she would run and leap but this time she didn't but still, it was lacklustre. "Come on Belinda, I expected more from you. Looks like I will have to teach you a few additional lessons as well when this is all over. As for you winning this match, it's nice to have dreams but we all have to wake up someday and it's time for me to wake you up." stated Akiha as she only gave a smug look for Belinda's last comment.

With that the bell would ring, usually, Akiha would go for a collar and elbow tie-up, trying to get a feel of her opponent but she knew Belinda well. Instead, the Japanese Crusader would play to her own strengths, trying to use her superior speed to win. Not wasting a moment she would move in and jump in the air, attempting to doing a spinning heel kick, trying to kick Belinda right in the head, though she felt her rival would dodge the attack. If the attack missed, as she landed, she would attempt to perform a quick mule kick aimed at her opponent gut.
_________________

"Like I said, it's a call back to our first match and your first defeat. This will be your biggest defeat by my hands after all." Belinda said in a confident tone, as she stared Akiha down. Hearing her talk about dreams and all that only caused the blond to shake her head. " I'm wide awake, and ready to make you tap for the first time in your career. Akiha Kosha." Belinda spoke out as she narrowed her eyes.

She would lower herself down a bit and get into her stance, she would watch Akiha and see her move in and jump up into the air. Spinning and throwing her leg out like that and with it Belinda would dodge under the kick and let it whisk over her head. Only for Akiha to throw her leg back when she landed and nail Belinda in the bread basket with that mule kick, causing Belinda to gasp and stagger back, her arms wrapping around her midsection as the sudden kick took her by surprise.
_________________

"You seem overly confident, I will make sure to use that against you." stated Akiha in a confident tone as she would then hear the bell ring. With that, the match would now start and the crimson hair wrestler would move in to make the first move. She would jump in the air and swing her leg, attempting to hit Belinda with a spinning heel kick. The attack did miss but Akiha knew that Belinda was good and could probably dodge under it, that is why she had quickly followed it up with a mule kick. Akiha felt the attack connect, doing some damage to her opponent.

She would watch as the Swedish wrestler staggered. Not wanting to waste any time and also wanting to build up some momentum early in the match, Akiha would move in and attempt to jump forward, trying to bring her knee up and trying to strike Belinda in the chin with her knee.
_________________

Belinda staggered back and would cough out a little her eyes rising to glare at Akiha as she would see her rival readjust and then go for a run towards her. She knew that she couldn't let her rival get an early advantage and she knew Akiha enough that she was confident in what Akiha was going to do next.

However in the state of her stomach having just been kicked in by her rival, so the best she could do was raise her arms up. Akiha came in and drove her knee up and Belinda raised her arms to take the brunt of that impact but the knee still knocked her backwards, stumbling and falling onto her butt as she would grunt out, her arms aching a bit from that sudden rising knee strike.
_________________

Not wasting any time and wanting to build some momentum, the crimson hair wrestler would charge in and quickly close what little distance there was between the two of them before jumping in the air and hitting Belinda with a knee strike. Though she had aimed for the face, the attack only hit the blond wrestler arms who had brought them up to defend herself. Akiha had hoped her attack would fully connect but for now, she would have to settle for this.

Seeing her opponent now on her butt, Akiha would show no mercy. She needed to be totally ruthless if she wanted to win this match. Taking a step forward, she would then swing her leg, attempting to hit Belinda's temple with her foot, trying to knock her down early in the match.
_________________