» Apologies for my Hiatus/Yet Another Returning Thread
by Mart-Kos Yesterday at 11:29 pm

» Bethany Maroza vs Kazuma Satou - A lucky performance!
by Deus001 Yesterday at 11:22 pm

Making her way to the ring, Ciel would go down the ramp, wearing a wrestling attire. This ring was a private ring, no audience, no referees or anything. Just the two of them and a camera to make sure the counts were accurate. With that she would slide into the ring before pushing up and getting back to her feet. With that she would take a second to pull on the ropes, feeling how strong they were before then making her way to the turnbuckle. She would rest her back on it and place her arms on the ropes, using it for support as she then waited for Orie to show up. Though a part of her felt that Orie might not even show up. 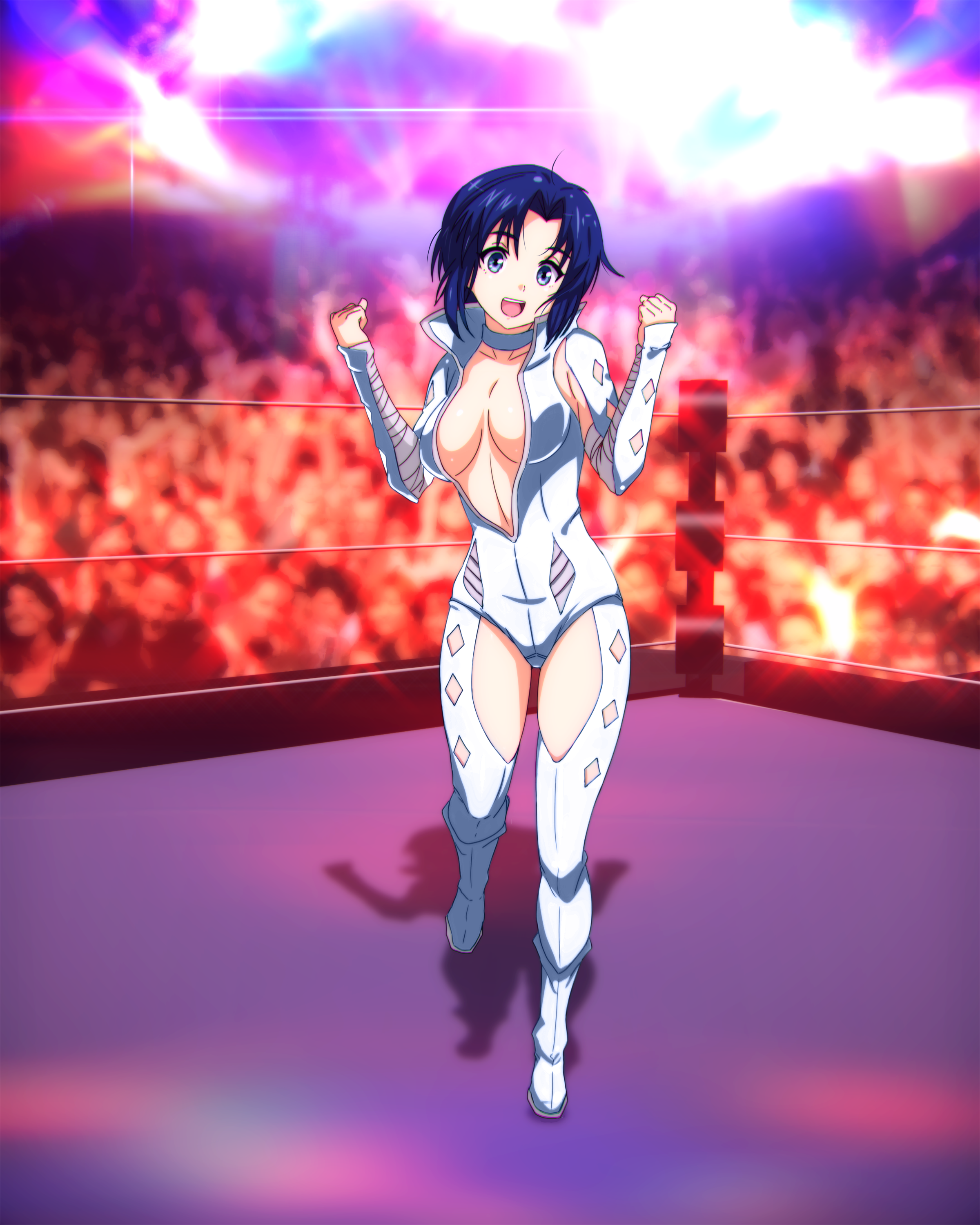 A fight in a lone ring. A fight to push and test Orie's body and mind to the very limit against another Executor's. Orie wasn't new to duels, she had several against both fellow Executors and enemies of the organization. But... this would be different. Trading fists and blades was one thing, but to push her opponent sexually, to push them pass the brink and then have her way with them, it was definitely a new kind of match. And the person in question... it was someone of similar rank and status, almost down to the same hair color and eyes apparently. Orie couldn't help but feel a little anxious. Relax. She took a breath, exhaling. It's just a duel. A duel where the winner could have their way with the loser for a time, but still, she just had to treat this like any typical fight.

Orie moved down the ramp, solemnly walking into the ring. The girl, Ciel, seemed like a short-haired version of her. Same hair color, same eye color. The only big difference aside from the hair was the outfit. Ciel had a much more wrestling-centric outfit while Orie only had a pair of loose training clothes. She didn't expect much for a private match, but she already felt outclassed in a way. She blinked, canting her head slightly before giving a small bow. "Hello, I am Orie Ballardiae." She said. "Let's have a fair fight." As fair as a fight like this could be.

Ciel would watch as her opponent would make her way to the ring.  Just as she heard, her opponent had blue eyes and blue hair, just like herself.  The main difference was that Orie's hair was far longer than Ciel's own hair.  Her clothing was nothing to fancy, simple but in this kind of match, it made make sense. Ciel would place her hands on her hips as she saw her opponent enter the ring.  The fellow executor introduce herself and asked to have a fair fight, well that was fine with Ciel, she was confident she could win this fighting fair and square.  Though she had to say the girl was very polite and respectful, traits that Ciel liked.  As such, she would make her way to the center of the ring and extend her hand for a handshake.

"Well met, I am Ciel and let us have a good clean fight." she stated with a smile on her face as she waited for Orie to shake her hand.  During this time she would also start to size up her opponent, it seemed they were about the same height, with Ciel maybe having a couple of cm's on her.  The two of them probably weighed the same, meaning it was going to be an even fight when it came to those categories.  So this fight would probably then come down more to skill, endurance and will power.
_________________

Orie looked down at Ciel's hand, then at her. She seemed nice enough. After hearing the conditions of the match it Orie expected more sneering and insults, but it was a pleasant surprise to see Ciel being a good sport about this. Even if the two would be slamming, throwing, and ravishing each other to the brink. This might be a decent match after all.

Orie smiled, taking Ciel's hand and shaking it. "Yes," She nodded, stepped back. It seemed the two were about the same height and weight, but whatever training Ciel had compared to Orie had yet to be seen. She was expecting something standard, but... only time would tell. Soon, Orie settled into a grappling stance, readying herself for battle.

"I would expect nothing less from you. With that let us start the match, Ding Ding!"

With that Ciel had officially started the match. She would now move in and try to get into a collar and elbow tie-up with Orie. She didn't know much about the fellow blue hair wrestler so this was a good way to determine how they compared against one another. If she managed to lock up, she would try to overpower her opponent.
_________________

And the fight was on. The two circled each other for a moment to size each other up and clashed, Orie followed Ciel's lead and grabbing at her collar and elbow as well, immediately feeling Ciel try to force her down. It seemed Ciel really did want a fair fight with how traditional she was being, and she definitely had the strength to prove it. A fair enough start to the match, but Orie wasn't so kind to completely play nice, so she pushed her head forward to bump Ciel's a bit to rough her up and throw her off.
_________________
The Azure Squadron

The two would now enter a collar and elbow tie-up. Ciel would attempt to overpower her opponent and she seemed to have the strength advantage. Though just as she was about to push her advantage she would be struck in the head by a headbutt, causing her to be dazed and flinch for a bit. The attack seemed to have caught her off guard, she didn't expect such a cheap shot to come from her opponent, after everything she had said. Well, it wasn't too much of a cheap shot but it did ruin the contest. That being said, it would leave her vulnerable for a moment.
_________________

Did wasn't like it did much damage, but Orie still couldn't help but winch a little, both from the impact as well as seeing the stunned look on Ciel's face. She obviously didn't see it coming, likely expected to keep the grapple going a bit longer until a decisive winner came forth. However... Sorry. Orie thought. But this isn't just a mere sparring session, and I won't become your plaything in this duel. Orie steeled herself, taking advantage of Ciel's weakened state to pull away from the hold, taking a few steps back and running in for a short dropkick to Ciel's face.
_________________
The Azure Squadron

Stunned from the blow, Ciel would soon find herself being released. Shaking her head a bit she would then open her eyes and see Orie coming right at her. Though at this point it was too late to dodge the attack, all she could do was place her arms in front and have it shield her face. Though the attack still caused some damage, as not only did it hit her arms but also caused her arms to hit her face. This would result on her falling down to the canvas, leaving her a bit exposed for a short moment.
_________________

Orie quickly got up from her dropkick, seeing Ciel was down on the ground and stunned. She took a breath, looking down at her opponent before reaching down and grabbing her leg. It's a little early for a submission... As tempting as it was to go for a quick orgasm and pin. She could probably go for a fall now, but it'd be better to wear Ciel out beforehand. She stomped hard at Ciel's lifted thigh, hoping to do some more damage while she was down.
_________________
The Azure Squadron