Spoils of the Lube War (for OmegaVan0)

Her friend Yvette was waiting impatiently at the door. She was dressed in a long button-up dress that covered her nearly down to her ankles, arms crossed and eyes glaring. When the door swung open, she finally laid eyes on Claudia for the first time. The blonde was a bit shorter than her, and looked rather disheveled, no doubt from the loud fucking she and Asaki had just been engaged in. She looked quite upset as well, probably due to being interrupted.

Yvette wasn't interested in Claudia at the moment. She ignored the blonde, craning her head to see if Asaki was behind her. All she saw was a pair of legs hanging off the edge of the bed, and what appeared to be a big pink rod sticking out from between the legs. Yvette realized what had happened, no doubt Claudia had not had enough during their match, and had just finished fucking Asaki again! The fact that her friend hadn't come to greet her worried Yvette, whose imagination ran wild with ideas of the mistreatment she was receiving from the hands of this blonde. The more she thought, the angrier she became.

"I'm Asaki's friend Yvette, and I'm here to rescue her," the French girl replied, "Now get out of my way!" She would attempt to push Claudia aside and make her way inside the room, hoping to scoop up Asaki and get out before Claudia could stop her!
_________________
The Party!

With her robe barely covering her body, Claudia opened the door and not even the sight of a cute girl like Yvette was going to calm her down for having her night interrupted. Even more so when the girl just bulldozed her way into the room, shoving Claudia back as her temper flared at being invaded in her hotel suite.

“Now just hold on a minute! Who the hell do you think you are!?” She shouted as she shoved Yvette to the side, putting herself between her and the side of the room that Asaki was on. “I don’t give a damn if you’re her damn sister, you don’t have any right to just barge in here and take my Asaki!” She shouted as she threw an accusing finger before attempting to grab onto her dress’ sleeves, trying to force Yvette out!

Seeing Claudia stand between her and Asaki, Yvette crossed her arms and frowned. "Last I checked, the match you won wasn't a prisoner of war match," the French girl said, "Just because you best Asaki doesn't mean you have any right to do anything you're doing now! She didn't agree to any of this, you're holding her and torturing her against her will!"

Claudia grabbed into Yvette and began trying to force her out. This incensed the French girl, who immediately fought back, slapping at Claudia's arms to get her to let go. "Hang on Asaki, I'll come get you!" Yvette called as she began to grapple with Claudia. Her hands shot out and grabbed the hems of the loose rove Claudia wore. Yvette intended to pull her out of the way, but the loosely tied garment instead came apart in her hands, opening up and revealing Claudia's nude body!

Meanwhile, Asaki was still too worn out to even move. "Ughhh..." the pinkette nurse groaned. She was only barely aware that just beside her, her conqueror and her best friend were about to start a nasty catfight!
_________________
The Party!

Claudia’s features twisted harder in anger at Yvette’s accusations, “Torture?! Just who do you think I am, some kind of slut!? Get out of here! I won’t have you come into my room and disrespect me with your bullshit!” Claudia shouted as she shoved harder into Yvette, trying to get the interloper out of the room, her robe coming loose from the hands of Yvette.

Growling, Claudia wasn’t having any of Yvette’s nonsense, to accuse her of being a sadistic person when all she wanted to do was love on her conquest. It greatly aggravated the usually calm and flirty Claudia as she grabbed onto Yvette’s long sleeves.

But Yvette was refusing to be evicted and Claudia’s body was still sore from the wild battle she had with Asaki as it still burned to this hour. The Symbol of Love was anything but lovely as she released on of Yvette’s sleeves as she rose her hand, before whipping it right at Yvette’s face to try and hard smack the girl in the face as much times as she could!
_________________
COME HERE FOR THE COLLECTION

"Look at what you did to Asaki! I don't think you're a slut, I think your a sadist!" Yvette said, gesturing at the pinkette nurse who still lay sprawled out on the bed, motionless, "You already fucked her unconscious in your match and now you're fucking her again, you are a torturer!"

Claudia grabbed and tugged on Yvette's sleeves, still trying her hardest to force Yvette out of the room. The French girl wasn't having it though, pushing back with all her might to try and hold her ground. She needed to get to Asaki and make sure she was alright, that was the only thing Yvette cared about at this point. With neither girl making much progress, one of them would have to break the deadlock.

And it was Claudia who made the move. CRACK! Claudia's hand struck Yvette's face, snapping her head to the side and knocking her glasses askew. The French girl was stunned, this was the first time in a long time that she had been slapped like that. Fury rose within her as now the fight changed from trying to save Asaki to defending her own honor.

Yvette's response came sharply and suddenly. The French girl swung back with her free arm, aiming an open palm of her own right at Claudia's cheek!
_________________
The Party!

Smacking Yvette across the face was another thing that Claudia didn’t do often, she normally wouldn’t hit a beautiful face like Yvette’s. But this wasn’t a normal situation, she was dead set on removing the intruder from her domain of love as she was trying to disrupt and end her night of conquest, something that Claudia refused to happen.

As soon as she slapped Yvette, the French girl came back with one of her own as she hit hard across her face, the droplets of water still in her hair flying off as her head whipped to the side. Now it was a real fight, Claudia’s anger couldn’t contain herself as let out a cry before shooting back at Yvette, moving in low to slam her shoulder into Yvette’s stomach while her arms wrapped around her legs, shoving into her as she tried to force Yvette further away from the room and into the living room!
_________________
COME HERE FOR THE COLLECTION

Once they exchanged slaps, Yvette knew the fight was on. She came mentally prepared for this, and though the situation right now was not ideal, she knew that once it came to a fight she would be favored. Claudia had to be tired after fighting and fucking Asaki all night, whereas Yvette was still fresh and ready. She would be able to outlast Claudia in a battle of attrition.

Claudia's anger made her much stronger than Yvette expected though. The loud cry surprised the French girl, and then a sudden naked tackle drove her backwards, sending Yvette tumbling onto the ground on her butt! The worst part was her dress, which had caught on a table corner, and ripped right open! The French girl groaned, quickly trying to get to her feet before Claudia could jump her again.

"So that's how you want to fight? Alright then," Yvette said as she stood back up. She took her torn dress and ripped it off her body, revealing what she wore underneath. 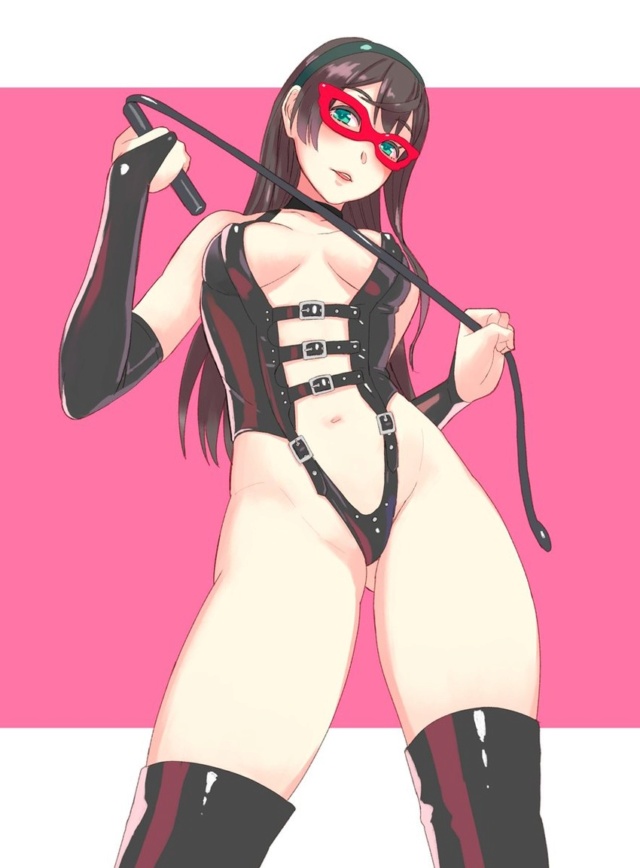 Claudia charged into Yvette as she shoved her away from the room and keeping her away from Asaki as their struggling got them to the living room. The loud rip of Yvette's dress being caught on the table roared out as the two of them broke apart with Claudia rolling on the floor and back to her feet. She wasn't anticipating another fight to happen in the night, her body still feeling the effects of the war she had with Asaki but Claudia was a proud woman and she wasn't going to stand for someone invading on her personal domain as she watched Yvette stripped who clearly came prepared for a fight in such an attire hidden underneath the dress.

"Bring it on bitch, I'm not going to let you take my Asaki from me!" she roared out, charging at Yvette with her hands extended to slam into her chest! Squeezing the pair, she would continue to shove Yvette backwards towards the couch!
_________________
COME HERE FOR THE COLLECTION

Yvette took a step back as Claudia charged her, showing her furious aggression. The French girl wasn't quite ready, gasping out as Claudia grabbed onto her small breasts. She got driven back until her legs hot the couch, tumbling upon the soft cushions!

But the fight was just beginning and with her legs freed up Yvette could start using her most dangerous weapons. Yvette kicked her legs up, wrapping them around Claudia's waist. The French girl's blue eyes flashed as she suddenly smiled at her opponent. "Got you!" she said, as she squeezed down hard! Her arms also shot up, grabbing the blonde's massive mammaires, immediately going for her hardened nipples and giving them a tight pinch!
_________________
The Party!

They fell on it, shifting the heavy couch only by an inch as Claudia immediately went to work, pushing Yvette harder into the cushions as she tried to bury her within them, but Yvette was not one to wilt against her attack as she threw her legs up and wrapped them around her waist!

“Nnnngh!” The Symbol of Love let out, the slender legs were quite powerful in squeezing her stomach and sapping the already weakened body of even more energy and it didn’t stop there, Yvette quickly seizing her breasts for a tight squeeze! The intruder showed her ruthlessness as she went for Claudia’s nipples, squeezing on the hardened nubs as the blonde’s eyes widened as she cried out, hands shooting for the wrists and clutching tight on them, trying to weaken Yvette’s grip as she was put on the defensive!
_________________
COME HERE FOR THE COLLECTION

Similar topics
» Lube Warfare! (Claudia vs Asaki The Love Nurse)
» Spoils of war
» Crusader Spoils of War
» The Spoils of War: a first taste of gold
» Victor's spoils. (For Person)