Tonight was essentially a day off for Bomber Kishima. She wasn’t scheduled for anything on the show, so she was just hanging out backstage at the arena. If nothing else she could watch the matches and grab some food from catering, maybe find a few people to catch up with. Tonight she was wearing jeans, a light jacket, and one of her official t-shirts, which had a picture of herself making a bicep flex pose and the words “LARIAT QUEEN” above.

Kishima was just making her way to the catering area when she walked past the posting of all of tonight’s matches. Curious, she went over to it and started looking through it. About halfway down she found a name that made her eyes go wide at the sight. Immediately Kishima took off in a sprint for the locker room, knowing that’s where she would be right now. When she got there she burst through the door, and her eyes went straight to Mighty Yukiko, her former tag partner and best friend, who she hadn’t seen in what felt like forever now. Even after Yukiko had returned, it seemed their schedules had never aligned to allow a meeting between them until now. 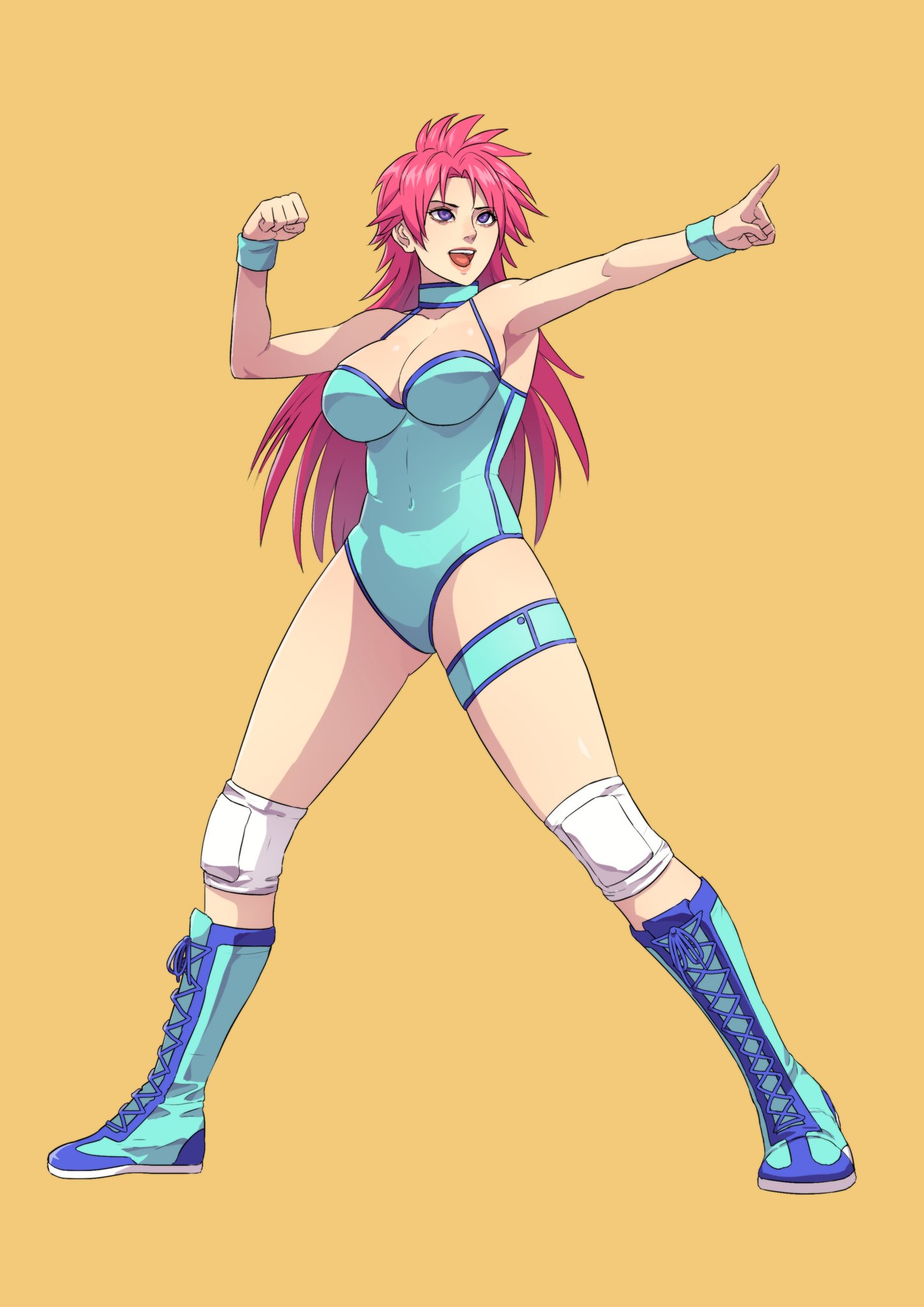 Yukiko would had been lying if she had said she wasn't feeling a bit bad about how her performance had been so far here in Friction. Ever since she joined she'd been put up against tough opponents and she had been coming up short. Though that was to be expected. After WA closed it's doors she had essentially returned home trained people at a little wrestling school of her own.

She had maybe been out of the game for too long? Though it was a bit disheartening to say the least, that she might not be the same kind of Ace that she had been before. As she was contemplating this, she was starting to feel as if she was going to get a headache from all this heavy thinking, before a suddenly the door burst open! Literally jumping up in surprise and releasing a loud yelp, " WOOAH!?" of surprise and a bit of being startled.

Mighty Yukiko's eyes would widen to nearly twice the size as she heard the voice of none other than the fellow Bash Sister! Kishima! " K-Kishima!?" Yukiko exclaimed with happiness and surprise as the mighty former tag partner of her came up and snatched her frame in a tight hug....inadvertently flinching a bit as she was half expecting a bearhug from her friend.
_________________

Was it wise to be giving Yukiko such a tight bear hug so soon before her match tonight? Probably not. But Kishima sometimes had a way of letting her enthusiasm and excitement get the best of her. There was no avoiding such a reaction here, seeing her friend after so much time apart. Kishima even spun Yukiko around a couple times before finally setting her back down, laughing softly as she did.

“Sorry, couldn’t resist. I’m just so happy to see you again. It’s been way too long! Still looking good as ever, though. You don’t look like you’ve aged a day!” she said, giving Yukiko a playful bump on the shoulder with her fist.
_________________
LARIATO'S LOCKER ROOM

Being spun around like a child would probably have annoyed most people...and maybe Yukiko as well if she wasn't so happy right now to see her old friend and tag partner, and legitimately coolest person ever, Bomber Kishima! She winced a little in the hug, as she was then put back down.

" Ahah! It's alright, buuuut!" Mighty Yukiko added as her own arms would come up around Kishima's body after that bump to her shoulders. Giving her tag partner a hug of her own. As she would try and lift Kishima off of the ground and spin her around, settling her tag partner down after which.

When Yukiko hugged her, Kishima was just about to put her arms around her friend and hug her again, before the Bomber was suddenly lifted off her feet and spun around just as she had done to Yukiko a moment earlier. Kishima couldn’t help but laugh as she was set back down. God, she’d missed this.

“Pfft, not in the slightest,” she replied. In truth, a small part of Kishima envied Yukiko for her good looks. And even after so much time had passed since the end of the Wrestle Angels days, Yukiko still looked every bit as beautiful and radiant as she had back then… In any case, Kishima pushed the thought aside.

“You’ve got a match coming up pretty soon, yeah? Feeling ready for it?” she asked. Kishima had bolted straight here after seeing Yukiko’s name on the match card, but hadn’t even looked to see who her old friend’s opponent was supposed to be.
_________________
LARIATO'S LOCKER ROOM

Yukiko had really missed this, Bomber Kishima of all people always managed to put a smile on her face. She would smile and when her friend replied in such a truthful manner that she really hadn't aged a day, the Mighty one would shrug, " Ah well....I'd hope to mature a bit at least. Guess not, Tehehe~" Yukiko joked as she would then be snapped out of those thoughts.

She had completely lost her train of thought when Kishima had entered the room, the fact that she had a match on the agenda had completely vanished from her mind and now Kishima reminded her, it came like a sucker punch straight to the jaw.

Kishima frowned at Yukiko’s answer. She appreciated the honesty. It was better than to pretend she was ready only to go out to the ring and show the whole world the contrary. Still, Kishima remembered what Mighty Yukiko had been like during the peak of her stardom in the Wrestle Angels days. She had never heard that Yukiko question herself so strongly before a match.

“Hey, hey, come on now,” Kishima said, putting her hands on her friend’s shoulders and looking her in the eye. “Don’t worry about those other matches. You and I both know you can’t win them all. Even if that fire hasn’t come back as soon as you’d hoped, all it takes is a spark to light it up again. I’m glad you’re back, and I know for a fact the fans are too.”

Another thought crossed Kishima’s mind, and after a moment of hesitation, she continued. “Let me be in your corner tonight. I know it’s not the same as tagging together again, but at least you’ll have someone out there who you know has your back. How about it?”
_________________
LARIATO'S LOCKER ROOM

Yukiko was as always appreciative to have a friend like Kishima, she half expected to get a scolding but her friend decided to instead talk to her and reassure her. Nodding her head as she would look on at her friend....she didn't respond yet, taking her time to think through the words she had been given. Perhaps her friend was right, perhaps not...it was hard to decide before she felt the fire within her come back.

When Kishima asked to let Yukiko have her in her corner the eyes of the pink haired Ace would widen, first in surprise and then lighting up a little bit..." Ah! I'd love that, really!" Yukiko let out in a cheerful manner, she didn't often have people in her corner but she knew for a fact that if she was ever going to wrestle her best it was when Kishima of all people was watching her. She would nod her head again and again as she was rather happy at the thought. Taking a step back as she'd bring her hand up as a closed fist.

" Okay, I think I can do this! Just watch me...I'll try and get back into action just like the good old days." Mighty Yukiko spoke out, a bit more spirit in her tone of voice now than earlier...still not back to the same intensity she had in the glory days, but she wasn't exactly there yet.
_________________

“There, that’s the spirit!” Kishima said with a grin. She was glad her idea seemed to help lift Yukiko’s spirits back up. Doubtless her friend would still need more work to fully be her old self, but this was clearly a good step in the right direction, which was as good as Kishima could hope for right now.

“That’s what I like to hear!” she said, giving her friend a big pat on the shoulder. “Now let’s go out there and remind the world how great Mighty Yukiko is!” Almost as if on cue, there was a knock at the door, and a voice on the other side said, “You’re up, Yukiko!”

Nodding her head rather happily so as her friend really did help boost her confidence right now, as she would raise her right hand up and clench a fist, she was ready! Well as ready as she was going to be for now. The pink haired woman would raise an eyebrow as there was a knock on the door and she was told by one of the stage hands that she was up.

" Yeah!" Mighty Yukiko let out as Kishima then asked her if she was ready for this, she did feel ready actually...the question was if she could get rid of whatever ring rust or whatever it was that had been bothering her when actually in the ring.

Similar topics
» So I've Been gone forever.
» Goodbye for now... or maybe forever i don't know.
» Cookies Are Forever
» Geez, it's been forever
» The Hasegawa Sisters vs the Rivers Sisters