How do you manage a goddess?

How do you manage a goddess? 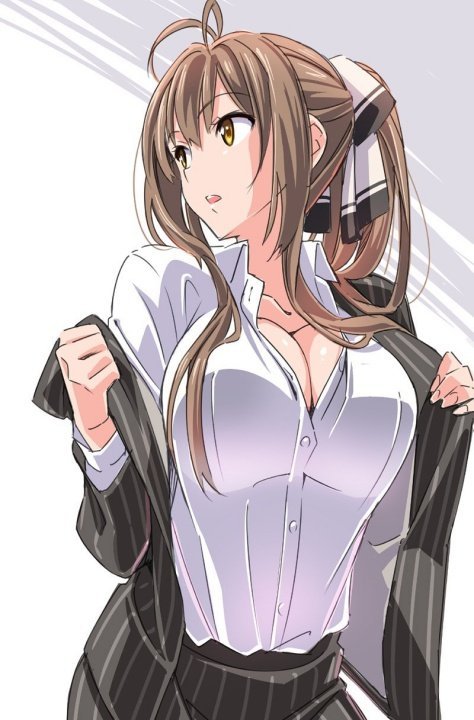 Starting out her career in AFW was easy enough for Amaya, she had been in talks with the higher ups and looked over some files, trying to figure out what she could do to leave a good mark her as a manager. It took a little while but she had settled on one particular woman whom she had taken an interest in. Well...there was one or two candidates more but she had decided to start off with this particular one. Looking over her tapes and going through her history hadn't been the easiest task, but she had done so while she tried to figure out how to approach this woman.

Firstly she had decided to meet with her. Moving off she'd walk up to the locker room she had heard that Aphrodite, the Goddess of Love. Formerly known under the moniker of Aisha Love, real name Aisha Norman. She would knock on the door as a courtesy but nearly right after she did she'd open the open the door. " I'm entering." She spoke out as the woman dressed in a pin stripped suite, pencil skirt and all walked into the locker room.

She didn't exactly know how Aphrodite would respond but she was quite interested in seeing her reaction to a woman just barging in.
_________________

Aphrodites has gone rather well tonight, having managed to utterly crush her opponent, making them submit to her only a few minutes into the match. She had just stepped out of the shower, cleansing herself of the sweat and grime that could accumulate on her person while she was in the ring. If only all matches could go her way like this, she would assume it would be rather boring, but every now and then it helped to win near outright and show her supreme power and grace in the ring.

She had just sat down on a wooden bench before her locker, brushing her blonde hair in the mirror as Amaya entered the room, "O come in, I wasn't expecting you this soon. So you must be Amaya?" Aphrodite turns to the woman in greeting, crossing her legs as she puts the brush down, "I was told that you'd be coming here to meet me but not the nature, care to explain?"
_________________
-Moonlit Roster
-La Avispa Negra II
-Aphrodite: The Love of the World (Formerly Aisha Love)
-Ragna the Crushing Beast
-Ninja Kitsune Yori Takibi
-Grizzly Yamamoto

Having entered the room now, there was one thing that caught the attention of Amaya. She'd seen plenty of pictures and videos of Aphrodite but they hardly did her justice in person. She was without a doubt a stunning looker....which was a big positive. A lovely face in this business in tantamount to success.

Nodding her head, Amaya would give a light bow out of proper courtesy, she'd procure a business card with her contact details and current profession on as were the customs in Japan. Offering it to the beautiful blond, " As you already know, my name is Amaya Ito. I've been set to be your manager." Amaya would let out rather bluntly so.
_________________

The supposed goddess would watch her bow but did not in return. Since the change from her days of being the Cherry Bomb Aisha Love to Aphrodite, she was far less in tune to the customs of AFWs home turf. She simply sat there and watched as Amaya introduced herself to her, brushing away some of the long blonde hair that had gotten in her face. She was attentive though relaxed, keeping watch of her seemingly more business oriented guest.

"A manager you say, why do I need a manager, I do very fine by myself?" she says looking down at the business card with interested look, or at least one that she gave and presented.
_________________
-Moonlit Roster
-La Avispa Negra II
-Aphrodite: The Love of the World (Formerly Aisha Love)
-Ragna the Crushing Beast
-Ninja Kitsune Yori Takibi
-Grizzly Yamamoto

Amaya would listen to the words of her new client, and it seemed as if Aphrodite had different ideas of what she needed or she was simply questioning the need of a manager. Amaya would clear her throat a bit as she would straighten herself up. " You are doing quite well by yourself, though I'd say if you were satisfied with how you were doing then you shouldn't call yourself a goddess." Amaya spoke bluntly.

" If you are satisfied though and you don't wish to reach greater heights than now, then that's a decision that's entirely up to you. " Amaya kept a very professional tone as she simply laid out the truth as she saw it to the beautiful blond in front of her.
_________________

"And what do you propose, what am I even to gain from such a partnership with anyway that would make me so much better. To ascend to higher powers above all?" she says before seemingly slipping into a tone far less goddess like and more personal and off the cuff as she took a drink from a water bottle near what appeared to be her duffle bag, "Alright fine tell me what you want to do I'm all ears for what you want to do here just don't bore me too much alright."

She waved her hand to have Amaya sit down across from her on a bench, "No use standing while we discuss."
_________________
-Moonlit Roster
-La Avispa Negra II
-Aphrodite: The Love of the World (Formerly Aisha Love)
-Ragna the Crushing Beast
-Ninja Kitsune Yori Takibi
-Grizzly Yamamoto

Amaya would hear the change in tone in Aphrodite and would nod her head. She would start by taking the beautiful woman up on the offer and sliding in to take a seat next to her on the bench. " Firstly, we needed to asses all of your strengths and weaknesses, work on a plan to proceed and then achieve the goal you have set for yourself. " Amaya spoke as she would look on at her client.

" I will not only make sure to boost your popularity but also build you up and help you overcome hassels. This partnership will be completely about getting you to the highest point possible in this business right? Therefore, opponents, special events, matches, even titles are things I could reasonably help you obtain." Amaya spoke out in a very business like and serious tone still.
_________________

Aphrodite seemed to like what she was hearing, nodding her head as Amaya went along with her plans. She kept quiet, intent on listening and learning of her possible new business partners plan. The goddess like that she went down to business with things, not wasting a single moment to tell her what the plans were, a hand to her chin as she leaned forward inquisitively like the famous Thinker of August Rodin.

"Tell me though, what would you propose we do right now we shall do. Examples to be more precise, I am be very open to your ideas, I like them very much," she seemed to give off a smile, as if somewhat disarmed.
_________________
-Moonlit Roster
-La Avispa Negra II
-Aphrodite: The Love of the World (Formerly Aisha Love)
-Ragna the Crushing Beast
-Ninja Kitsune Yori Takibi
-Grizzly Yamamoto

When the beautiful blond leaned forward a bit, seeming interested now that Amaya laid out her plan and ideas, though it seemed as if the Goddess of Love wanted to know what she could suggest they do right now, Amaya would nod her head, she figured Aphrodite wanted to hear about the short term plan for now.

" Well, we need to build you up of course, we need to get your name as big as possible." Amaya spoke as she would move a strand of hair back behind her own ear. " You aren't unknown, but we need to make sure your name is among the top echelon. So we should find you some more opponents, get your name out there a bit as well. How do you feel about photoshoots? " Amaya would ask as she smiled towards the Goddess of love.
_________________

"Photoshoots, you are talking my language now," she seemed to be rather excited at that prospect as she took a few sips of water. The boost to not only appeal but also her name was a big aspect that she had been trying to fix for some time but never able to figure out what to do and where to go next with the whole thing.

She put a finger out on Amaya's chest, pressing forward, "Now however there is one bit I must ask of you. Certain matches of mine are by far of a more lewd variety. A woman of my sort is able to handle such without much hesitation, but you on the other hand, is this something that you can handle?" Aphrodite asked, she wasn't going to have some sort of nun watching her.
_________________
-Moonlit Roster
-La Avispa Negra II
-Aphrodite: The Love of the World (Formerly Aisha Love)
-Ragna the Crushing Beast
-Ninja Kitsune Yori Takibi
-Grizzly Yamamoto