Himari slowly trudged to the exit of the arena after a day of many rejections. Wrestler after wrestler had denied her requests for a match. They didn't explain why but the Japanese doll suspected it was because she didn't have the appearance of a serious fighter. Even when she put on her most formal blouse! 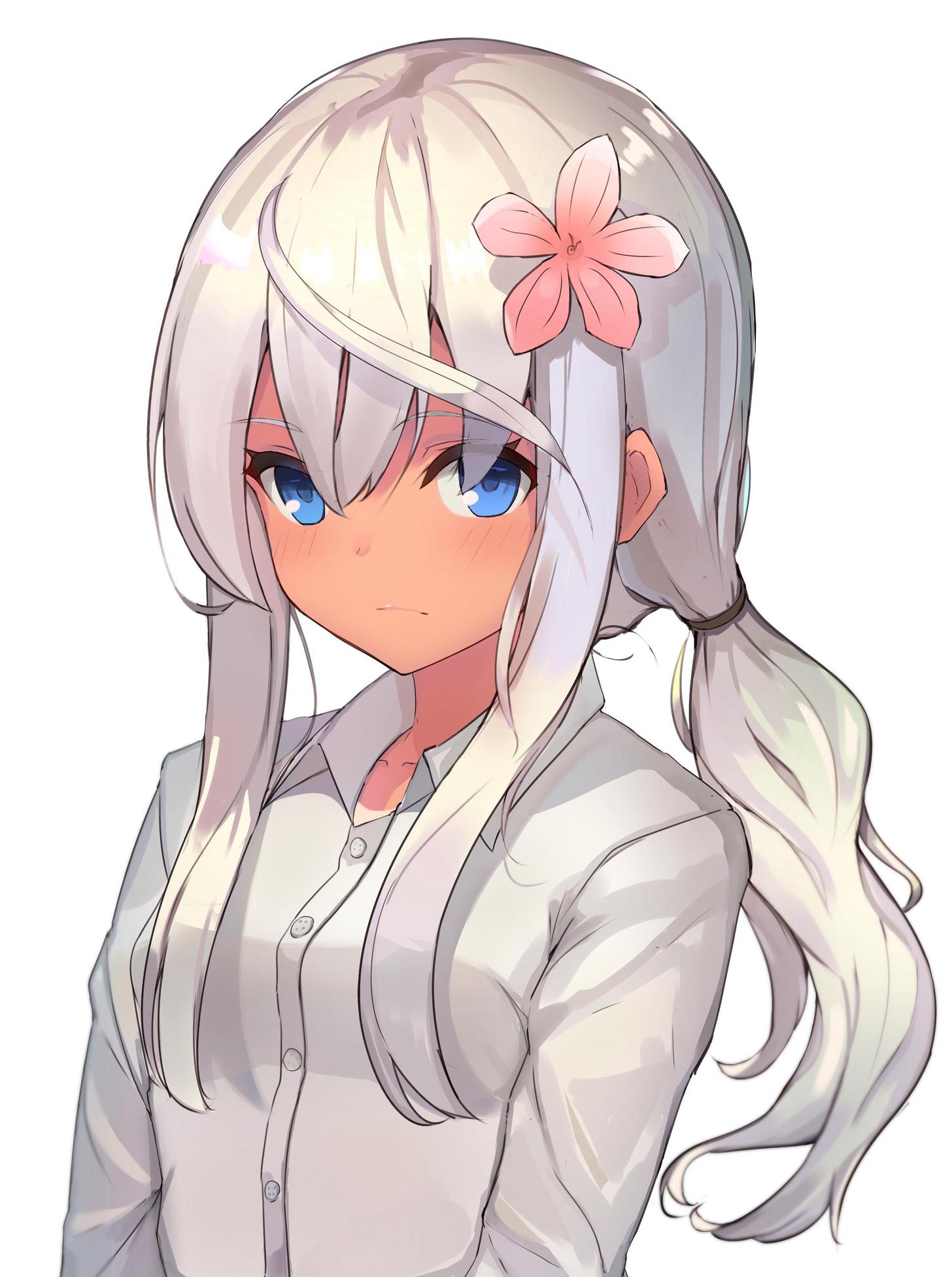 Yet as she was heading towards the door she saw one last wrestling prospect, a blonde girl with fair skin. Unlike most of her recent opponents, this girl had a similar build to Himari. "Maybe she'll have the fighting..." She thought with a glimmer of hope.

Himari bolted as fast as she could in her recently purchased high heels and long skirt, she managed to get between her potential opponent and the door. Bowing repeatedly, Himari made her plee: "I'm sorry! Please don't leave! Fight Himari!"
_________________
Howdy i'm WrestleMind and there's nothing i appreciate more than honest feedback and discussion. Wanna tell me I suck? You would make my day!

Shiho really hadn't even been intending to come into the arena today. Her Kawaii Division matches were pretty spaced out, giving her plenty of time to train and do some online shoots to bolster her earnings. Today, though, was Shiho's day off, a time for the blonde Sendai native to relax and take it easy. Shiho, therefore, had decided to take a train down to the beach, where she could relax and get a tan and eat some watermelon and drink some Ramune. She had forgotten her only good beach bag in the gym, though—served her right for being lazy and not buying a new gym bag after the one she came to Tokyo with tore open—so she had had to stop by to pick it up, already wearing her bikini underneath a pair of tiny shorts and an oversized T-shirt.

The pickup had gone without incident, and Shiho was about to make it out of the building without having to talk to anyone when, suddenly, a girl as small and petite as Shiho herself jumped in front of her, bowing and jabbering about fighting her! Shiho's eyes widened and she recoiled, putting some space between herself and the sandy-haired girl with the Kansai accent. "Ummmm...sorry, I'm busy! Maybe some other time!" she said, trying to step around the girl to the door.
_________________

Himari shook her head vigorously and side-stepped Shiho before she could reach the handle. "Nuh-uh! I am needing you in a match! Any place any rules!... Please?" The humble girl dropped to her knees and put her hands together as if in prayer. She looked up at her new blonde friend with sparkling sapphire like eyes. It was hard to say no to that sort of face.
_________________
Howdy i'm WrestleMind and there's nothing i appreciate more than honest feedback and discussion. Wanna tell me I suck? You would make my day!

Shiho stepped to the side, but the other small girl stepped in front of her again, still begging for a match. Shiho's cheeks puffed and brow furrowed, taking on a pouty countenance as her whole beach day plan was being put on hold by this little pipsqueak!

"Rrnnngh...what's with you...?" Shiho growled, baring her teeth a bit, though when the girl dropped to her knees, begging and pleading like an absolutely pathetic baby, the blonde found it difficult to just write her off and keep moving. Her face reddened a bit as she tried to work out what to do, still frowning as she stepped back and tried to plot a way to get around the Kansai girl. "C-come on...let me go...I just wanted to go to the beach today..." Shiho grumbled.
_________________

Himari nodded eagerly at this new information. "That can work! I'll go to the beach with you, we'll wrestle, it'll be fun!" Himari bent her head down, completely dejected. "But... I guess if you still don't want to do the wrestling... I'll have to go back home... As the failure!" Tears began to well under the desperate girl's eyes. Her pleading turned to a sad whimper.
_________________
Howdy i'm WrestleMind and there's nothing i appreciate more than honest feedback and discussion. Wanna tell me I suck? You would make my day!

Shiho thought that that might get her off the hook. Couldn't this pint-sized pugilist take a hint? But no, the girl—Himari, she had called herself—kept on begging, kept on demanding a fight, even saying she would fight Shiho on the beach! The blonde didn't want a fight with some little jobber today! She had been hoping for a nice, relaxing day of getting a tan and catching up on some of her mangas! She had three whole tankobon volumes that she had been waiting to read for weeks!

"No, no, it's my beach day, I just want to be alone!" Shiho said, but then the girl started whining. She started bemoaning her fate, whimpering about being a failure! Shiho snarled again, her sharp little teeth being shown off as she tried to figure out how to deal with this strange girl!

Himari slipped a coy smile at her Shihos question. "Cause it has good guys and bad guys! Cause anyone no matter how small or weak could win!" Himari began speaking in a hushed tone. "And cause... Cause... I can wrestle lots of cute girls..." The delicate dolls cheeks reddened

Himari gently clasped one of Shiho's hands in her own. "So... Do you want to wrestle?"
_________________
Howdy i'm WrestleMind and there's nothing i appreciate more than honest feedback and discussion. Wanna tell me I suck? You would make my day!

"Uuuuummmm..." Shiho intoned, trying to figure out how to respond to this girl's sudden mood swings, from fighting back tears to gushing romantically about the thrill of wrestling and the opportunity to fight cute girls. It was getting a little ridiculous, and Shiho wasn't sure whether she should feel sorry for this girl or be angry at her!

"That's...wrestling is good for those reasons just, like, in general," she stammered, trying to put her thoughts into words. "But you shouldn't try to force me into a match today, when I have other important things to do! Actually, you're really starting to piss me off!" Shiho thought about that for a few seconds as she wriggled her hand out of the girl's clutches.

Himari mockingly reeled back in shock. "You threatened me? You act like the villain!? Ooh I'm shaking in my shoes!" The overly enthusiastic girl dove in for a quick hug around shi how's waist. Just as quickly she ran off.

"I'll go get the swimming suit and then you can kick my... Butt... at the beach!" Himari giggled and waved goodbye before finally exiting the room.
_________________
Howdy i'm WrestleMind and there's nothing i appreciate more than honest feedback and discussion. Wanna tell me I suck? You would make my day!

This was, without a doubt, the weirdest lead-up to a fight Shiho had ever had. Back in school, there had always been lots of taunting on both sides, insults about each other's bodies—tits, or lack thereof, the way the other girl smelled, the stupid way she spoke—and some hairpulling and slapfights as a prelude to the all-out war of a schoolyard or playground brawl. Here, the girl begged her to fight, did some weird little hero-villain speech, then gave her a tight hug and ran off, giggling and waving goodbye in that pathetic, innocent fashion.

Shiho really was speechless. And she was thinking about how she could just ditch the girl now. She didn't know what beach Shiho was going to! And it wasn't like there was one single beach in particular that was right nearby. While the girl was out of the room, Shiho could finally make her escape. She had always been a social girl, but there were occasions when she just had to take some time to herself, for her own mental wellbeing. This was supposed to be one of those times.

Similar topics
» Himari Saito Vs Lexi Dawson: Himari finally gets her debut!
» A Deal of Desperation
» The Real Deal
» A Foxy Deal
» The Art of the Deal