The forearm strike didn't serve Lucy well as Misaki stepped out of the way and threw her knee up into the redhead's gut, causing her to cough out and drop onto one knee. Air having left her lungs as she would gasp and shake her head. Wincing out in anger, she would try and rise up to her feet and turn to Misaki.

Trying to grab at Misaki's outfit so she couldn't run away this time, Lucy would try and throw a punch right up into Misaki's face! While she might be outmatched her, she wasn't about to back down this easily! Her anger couldn't be sated!
_________________

Misaki tried to be reasonable, as much as she could seeing as she was Sakura's friend and mentor, but Lucy was being too persistent and bratty. The Ace would finally break, bringing her knee up into the Demon's belly as the red head dropped down to a knee infront of Misaki, who stood there with her hands on her hips and looking down on her.

"Stop this Lucy" she said again. Misaki would grit her teeth in anger when Lucy would grab her outfit but the Ace didn't do anything, which would prove be a mistake as Lucy would lunge up and punch Misaki in the face. "Nrgh Owww" Misaki cried out.

Having enough of her attitude, Misaki would turn back to Lucy and grab her by the hair before driving her knee into her belly once more, this time looking to follow up by wrapping her arm around her head and attempting a suplex!
_________________
Tension:

Smashing Misaki in the face seemed to to cause Lucy a bit of a satisfaction but it was short lived as she then felt Misaki grab at her hair and yank her in, throwing her knee right up into Lucy's gut and causing the redhead to gasp out. Air leaving her lungs and the feeling as if she had literally had a sledge hammer hit her right in her abs took hold of Lucy.

She would gasp and cough out, but Misaki wasn't done. Yanking her head in under that armpit, Lucy would groan as she felt Misaki try and lift her up! Frantically struggling, she'd stomp at Misaki's foot to try and prevent her from the suplex and then quickly try and frantically yank her head free and create some separation between the two of them.

Perhaps Misaki was being too brutal, she wasn't usually the type to lash out on rookies and she realized that after she struck Lucy with a second knee strike. However, things hadn't been going her way in AFW and perhaps this was pent up frustration.

Before she could slam Lucy with a follow-up suplex, the Demon managed to stand her ground and stomp at Misaki's foot, managing to stop Misaki from executing the hold. As she tried to wriggle free, the Ace would let her go and give her a hard shove to push her down on her ass once more.

Lucy winced as she slipped away from Misaki, shaking her head and coughing a bit. She would glare at Misaki as she closed the door like that, slamming it hard. Lucy wasn't going to be able to get any form of payback against Lucy with Misaki around...but perhaps she knew a way to tip the scales.

Heading away for a while, Lucy pulled out her phone and began to call someone. The way she spoke to  the person was rather matter a fact. " Yeah, Can you get down here? I got a task I might need help with." Lucy spoke as she would then explain where they could meet.

After about 15-30 minutes, The woman whom Lucy had called had arrived. Seiko Kanzaki, Lucy's half-sister. 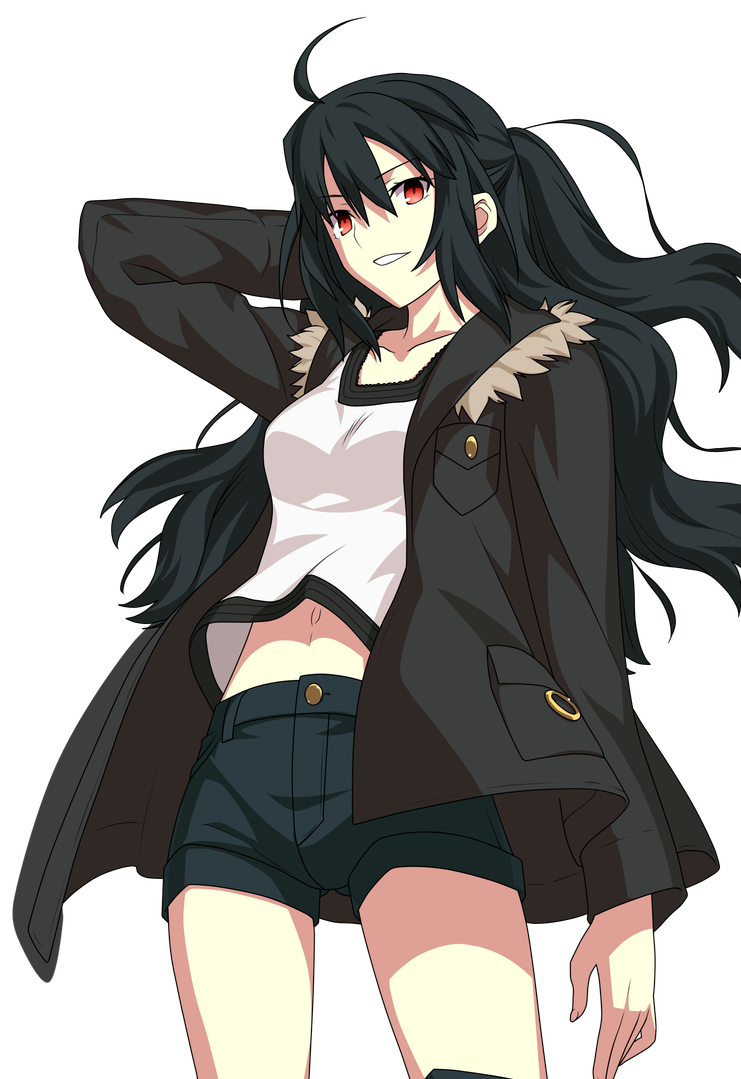 " Osu, what do you need help with sis?" Seiko asked, sounding rather bored and tired, probably having been woken up from a nap by Lucy's call.

" You know of Misaki Toyoda right?"

" Well...mind dealing with her? I want to get my hands on her protege."

Their conversation was brief, Seiko simply shrugged her shoulders next and Lucy pointed in the direction of the locker room. After a bit of a walk, they'd come to that locker room again, Seiko would yawn once more as she stood before the door, raising her hand up she would knock on the door in a rather normal manner, your average, every day knock.
_________________

It was all over and done with, Misaki would begin to comfort the shaken up Sakura once more, who was still bothered about the street fight and coupled with the fact that Lucy just came right at her door to finish what they started. Sakura did not want street fights like this but she had apparently majorly pissed Lucy off. Misaki would try to calm her down until the locker room door was knocked again, this time much more politely- like a average everyday knock on the door.

"Huh? Know who could that be" Misaki wondered before leaving Sakura's side for a moment to answer the door. She would open the door with a smile on her face, seeing the unfamiliar dark haired woman before her.

When the locker room door was finally opened and Seiko saw the sigh of Misaki, Seiko would tilt her head. " You don't look that impressive." Seiko said as she would turn her head to the side, looking on at her younger half-sister who was a bit away down the hallway, she turned her attention back to Misaki and shrugged her shoulders.

Throwing a swift punch up, she tried to nail Misaki right in the face before trying to grab at Misaki by her bangs to pull her in so she could try and throw a knee up into Misaki's abs, trying to leave her coughing and hunched over.
_________________

The Ace would open the door and there stood a rather impressive looking women, she didn't look very threatening but confidence was oozing out of her. Misaki acted friendly enough, however her greeting was not with a response that she expected. Seiko tilted her head, checking Misaki out which made things awkward.

"Uh, excuse me? What does that me-Uuuugghh" Misaki suddenly cried out when she was punched in the face and thereafter grabbed by her bangs to be pulled down in a hunched over position while the woman before her slammed her knee into Misaki's belly. The Ace really felt that and she would fall down on her knees, coughing a bit.
_________________
Tension:

It looked as if Misaki had been caught off guard as she smacked her fist into the face of the Ace and then drove her knee up, the unaware and unprepared abs of the Ace folding to that knee as the air was expelled from Misaki's lungs. Watching her fall down onto her knees.

Unaware of the circumstances of who this woman was, Misaki had no reason to have her guard up. It proved to be a mistake as Seiko would punch Misaki in the face and knee her in the belly, making the Ace go down on her knees with her arms wrapped around her body while groaning out loud.

Whilst down, Misaki felt her hair being released and Seiko saying something but it all faded away when a kick to the side of her head make her head bang against the door, instantly knocking the Ace down on her side, slumped against the door.

Hearing the commotion, Sakura would rush to the aid of her mentor. "HEY?! What the hell" she roared, looking to throw herself at Seiko in an attempt to tackle her.
_________________
Tension: