Wanna be the Strongest in the world (For Lunar)

Wanna be the Strongest in the world (For Lunar)

Sakura wasn't feeling too good about herself after her loss to Lucy Stone, she had gone to Misaki Toyoda for some expert advice and despite Misaki telling her how to cope up with a loss, the former idol wasn't feeling too good about herself. Misaki found life hard at AFW and Sakura was finding it even tougher, she thought to continue in her mentor's footsteps but was now wondering if Misaki was struggling in AFW- what chance could Sakura have? A recent spar with Masuyo really opened Hagiwara's eyes and that loss to Lucy was yet another eye opener for the Idol. 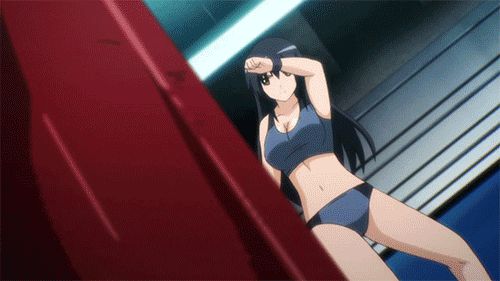 She knew she had to train hard. She knew she had to keep her chin up but with the way how things were going, it was hard to be positive. Still, she had to perserve and power through even though mentally she wasn't up for it. After a work-out and training session in the gym, which she did halfheartedly, Sakura would make her way out of the gym and back to her locker room still clad in her grey sports bra and wrestling briefs. She would walk backstage towards her locker room, seemingly lost in thought. She would wipe the sweat off her face and chest and with a heavy sigh make her way to her locker room.

Lucy was feeling pretty good today, she had just come off a recent victory against Sakura Hagiwara, in her mind that was a good win as she had defeated a famous wrestler here in Japan. Though Sakura wasn't exactly known as one of the best, even still, it would push up her career a few steps up that ladder just defeating a famous wrestler.

Also, putting the Idol in her place was a good thing as far as the Demon was concerned. Showing her how concieted that she was as an Idol turned wrestler, facing off against actual wrestlers.

Though, it was time for her to keep her body in shape. After all, Lucy had to keep herself in tip top condition to continue being as impressive in the ring as she could. Stepping into the gym, with a pair of black basketball shorts and a loose fitting t-shirt of the same color. Both Nike branded, though with a pair of Adidas shoes. Her hair was tied up in it's usually pony tail, as she made her way up towards her the gym.

Turning the corner she was met with someone as she literally bumped into a busty woman chest to chest, knocking her back a step. The two women seemed to have been rather out of it as they thought about their own things. Backing up, shaking her head....though when she cast her gaze on the woman she'd bumped into, Lucy's face curled into a cruel smile.

" Ooh?! If it isn't the loser Idol." Lucy said, dusting herself off a bit. It seemed that no matter what, Sakura was intent to put those huge cans of hers on display, in that tight fitting workout outfit she was wearing. Clicking her tongue a little, Lucy would step up and give a one handed shove to the woman. " What are you doing at the gym, huh? It's not like it will help you."
_________________

Deep down, Sakura Hagiwara knew the reason of her mood. It seemed as if all the other female wrestlers were better than her. Sure, she had picked a couple of wins in AFW but it seemed whenever a capable opponent crossed her path- she would be the won who would end up losing. Sakura wasn't quite sure if she was worthy to be in this league, with so many other female wrestlers having much more experience than her in the ring.

Those were the thoughts that were going in her mind when she accidentally bumped into someone, chest first! "Oww I'm so sorry it was totally my-HEY?! Y-you?! her voice turned from apologetic to a bit more pissed when she realized it was Lucy Stone whom she had bumped into.

She gritted her teeth and her fists clenched when Lucy called her a loser idol. "Grrr! mind your own business. I'm here to train, just like everyone else." she would say, her cheeks puffing.
_________________
Tension:

Lucy would narrow her eyes as she heard the tone that Sakura used towards her, causing the redhead to put on a cocky smir, she would keep her stance as she watched Sakura puff up her cheeks and seemed rightly pissed to be called a loser.

She would shrug her shoulders a little as she took to stepping forward and would give a shove to Sakura's shoulders. " Train?! You?!" Lucy said as she would start to laugh out, almost cackle.

Sakura was already feeling down about how her career in AFW was panning out to be. The last thing she needed was being taunted by the woman whom had beaten her in their last match. The former idol's cheek turned red in anger as she told Lucy to mind her own business, causing the Demon to shrug her shoulders and step forward before giving Hagiwara a shove.

"Nrgh, hey! watch it" Hagiwara would hiss, looking to push Lucy back with the same amount of force. "Nhg?! Grrrr" she growled at Lucy's words. "A loss isn't going to stop me from achieving my dream to become the strongest wrestler in the world" she said with a determined glitter in her eyes.
_________________
Tension:

Shoving Sakura was fine and good in the mind of Lucy as she made her stumble back, but the raven haired Idol retaliated with the same sort of push! Shoving the redhead back and taking Lucy by surprise as she even stumbled back a step more than Sakura had. Eyes widened as she would glare over at the Idol turned wrestler.

Hearing those loud proclamation, Lucy would grit her teeth....clicking her tongue as she would step forward and then attempt to shove Sakura with a whole lot more power behind it, practically trying to shove Sakura onto her rear! " Get real! A stupid idol bitch like you shouldn't even be in a wrestling ring!" Lucy shouted out, clearly a lot more frustrated at Sakura now.
_________________

Hagiwara was not going to take any more crap from Lucy. Whilst she was not as level headed as her mentor Misaki, it still did take a lot to push her buttons and Lucy Stone had done just that. After hearing her taunts and getting shoved back, Sakura would retaliate with her own choice words and a shove of her own.

"Ah!" the model cried out when she was shoved again, this time she fell flat on her ass. Stumbling down, Sakura would rub her tailbone before looking up at Lucy with a determined glare. "Grrr enough! I'll prove you wrong...I do belong in the ring and nothing you can say or do is going to make me think otherwise" she said, pressing her palms against the floor to push up and get back up on her feet, pressing up against Lucy in a heated staredown.

Lucy shoved Sakura down hard onto the floor, right on her ass. A smirk on her face as she would glare down at the raven haired woman who quickly moved up to her feet and moved up, pushing her large chest right against the redhead, forehead's going against one another as Lucy would glare into the raven haired idol's eyes.

She would push right back into Sakura, getting really annoyed at this stubborn loser....she would reach up and grab a hold of Sakura's long black hair and yank on it to pull the woman away from here, " We'll see about that!" Lucy shouted out as she would try and throw her other hand up into Sakura's solar plexus, trying to uppercut the air right out of the Idol wrestler!
_________________

Even though there was nothing more Sakura wanted than to fight Lucy right here and now, she didn't want to stir up trouble backstage. Sakura was never the type of girl to be starting fights unless it was an official match in the ring or a spar. However, Lucy was really pushing her buttons and Hagiwara really wanted to take her down.

Still, she would press up to her rival and try to end it just by words but Lucy had other ideas. Suddenly, she felt her hair being grabbed and yanked hard, making her scream in pain. Whilst she tried to get Lucy's hands off her hair she felt a stiff jab into her solar plexus which knocked the wind out of her and made her double over infront of Lucy.

When Sakura pressed up against her, Lucy was without a doubt starting to get pissed off. She took a hold of that hair and yanked on it before she threw a harsh punch straight into the woman's solar plexus, knocking the wind out of Sakura's sail...but not for very long!

As right after she watched her double over, Lucy took a shoulder straight to her abs and she was forced off of her feet! Dropping down onto her back in a heap as Sakura came on top of her, having driven her down off of her feet with a spear, Lucy herself coughed out by the surprise of that spear as she remained underneath the raven haired idol.
_________________

Similar topics
» Wanna Talk About It?
» Wanna Be Stronger
» Theodora Roosevelt vs The Wanna Be's
» For online gamers. You know you wanna!
» Wanna know something about the lead artist of Rumble Roses?