» Nekketsu Championship Tournament: Round 1: Stone vs Syd
by M.J.Caboose14 Today at 7:08 pm

Victory Condition: Pinfall or Submission
Rules: Anything Goes, a victory can be obtained from any place within the AFW Friction Compound.
Attire: Standard 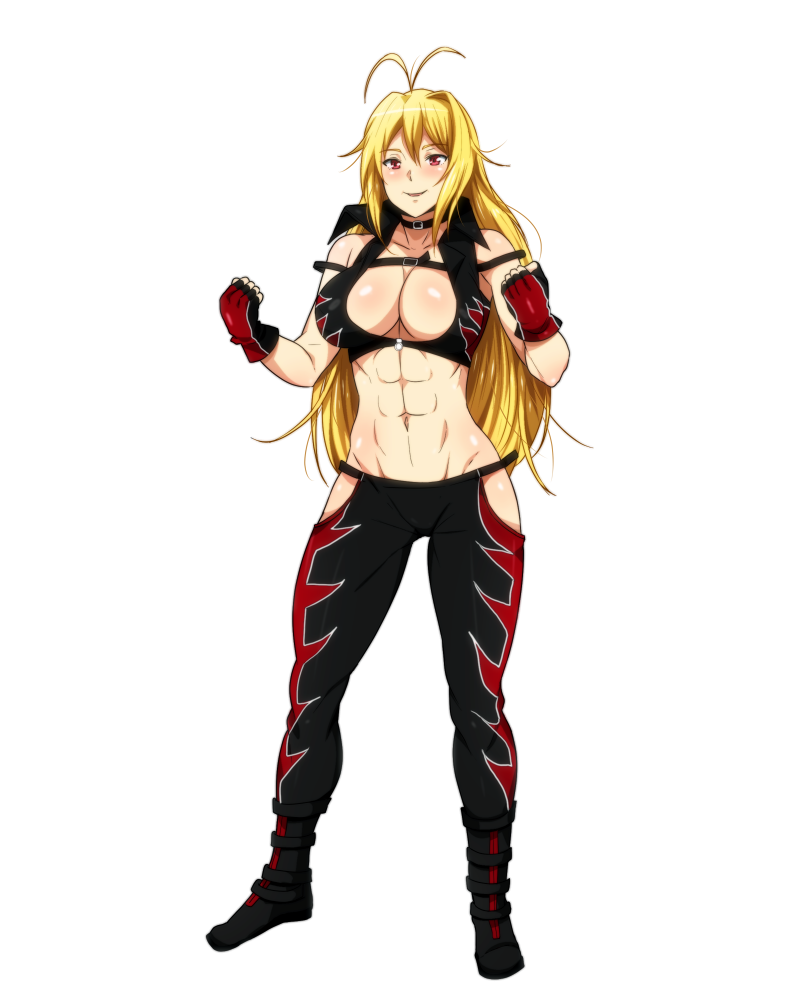 Tonight was a rather special night it seemed. The blond powerhouse Cecilia Northman was finally getting a chance to fight one of the women that she'd come to Japan to fight in the first place. Panther Risako was a woman who Cecilia had come to Japan for, there were many of those great fighter whom she'd wanted to face off against. On that list one of the top fighters was Panther Risako and now she was getting a chance to face off against her. The now world famous former champion of Friction, Cecilia Northman...now that she herself was an icon in the wrestling world was allowed to take on another icon.

A smile on her face as she adjusted her attire, standing at the Gorilla Position, the Swede would roll her shoulders a little and bounce on her feet. Feeling quite excited for this match, when her theme hit the blond powerhouse would take to the stage, walking out onto the top of the ramp as the showers of cheers and loud shouts for the former champion. Cecilia would walk down the ramp, confident steps as she made her way down to the squared circle. It didn't take long before she reached the the ring and climbed in. She'd move up to the center of the ring, raise her right fist to the crowd as she would then listen to the cheers.

When that died down, the blond would back up and head towards her corner. Reaching her arms over the ropes, she'd lean against the corner, eyes fixed on the top of the ramp as she was awaiting that icon of Wrestling that was Panther Risako. Waiting to see what she could bring to the table against the best that Friction had to offer! A wide smirk on her face as she tensed up a bit...all she could do was wait.
_________________

Tonight was no ordinary match, Risako knew as she finished sliding on her furred gloves, adjusting her panther-spotted outfit as she inspected herself in the mirror. As usual, she looked absolutely perfect, her slim figure hugged by her fake-fur wrestling outfit, her purple hair practically shining darkly in the light of her dressing room. Her classic, unchanged look from her Wrestle Angel days, from when she reigned as the Queen of Queens...which was all too appropriate, as tonight was going to be a clash of queens. Blowing herself a kiss in the mirror, she left the change room and strode down the arena, her background music blaring and her fans screaming her name. She ignored them, but smiled confidently all the same as she made her way to the ring. Her opponent was there already, awaiting her: Cecilia Northman, the Queen in the North...former AFW champion. From a distance, she looked just as she did on all of her televised matches...but Risako knew that it was up close, looking someone in the eye, that made the difference.

Sliding under the ropes, Risako sauntered up to her feet, elegantly brushing her hair back as she looked Cecilia over. The other girl was brawny, busty, blonde...and confident-looking. One wasn't a long-term Friction champion, after all, without having the power and the skill to back it up.

"Well well well...Cecilia Northman. I see your promotional pictures haven't done you justice," Risako said with a smile, speaking courteously as one queen to another. "I had hoped to fight someone special tonight...but I hadn't dreamed they'd be sending me against the former Friction champion. I'm honoured and flattered." She folded her arms as she looked Cecilia over, still smiling wryly at her. "I just hope you can back up that big reputation of yours, for tonight you're facing a Wrestle Angel."

Cecilia wouldn't have to wait very long before the so called Queen of Queens made her way towards the ring, the crowd cheered for the fellow veteran almost as much as they had done for the Swede. Cecilia couldn't help but chuckle out a little at the thought of them clashing now.

Stepping out of her corner as Risako made her way into the ring and would start to move closer towards Risako. The two of them having a little staredown in the center of the ring. Cecilia would smirk a little as she glared into the slightly shorter Risako's eyes. Taking a step forward as she would bump her impressive chest against Risako's.

" Not just a Wrestle Angel, The queen of queens." Cecilia corrected her opponent, as she would smirk. " I'm sure you'll see that I can back up my big reputation when I stand over you with my hand raised." Cecilia pointed out as she would press up against Risako. The crowd cheering wildly for these two talents, awaiting the actual match at this point.
_________________

Cecilia was pressing in close now. At this close a range, it was easy to see that Cecilia had a height and weight advantage over her. Risako showed no signs of fear as she met Cecilia's gaze. She had fought bigger women before, and won. Not that she was going to underestimate Cecilia, but by the same token, she wasn't about to be cowed by her, either. She smiled as she locked eyes with Cecilia, her bust pushing up slightly against the Swede's.

"My my, you know my title as well," Risako purred. "You honour me, Northern Queen. And here I was afraid you would be be some arrogant blonde with the manners and honour of a thug. I'm glad to see I was wrong." Her smile widened a little. "Though Emily was right about you, though: you behave as though you've already won. I'm afraid I'm going to have to disillusion you of that notion tonight, Northman."
_________________
UNDERDOG'S KENNEL:

Cecilia stood pressed against her slightly smaller opponent as she would narrow her eyes. The Queen of Queens could certainly talk to talk, the question was only if she could walk the walk. The blond kept her hands by her hips as she stood firm against Panther Risako.

" Oh I'm quite a thug. You'll see that when we start fighting." Cecilia said with a chuckle, at the mention of Emily though, Cecilia would smirk. " Oh? Can't argue with that. Though, it's not a disillusion. It's simply what will happen. So give me your best shot. I can't wait to defeat the best Wrestle Angel had to offer." Cecilia teased as the referee would then step up towards them and start to separate the two of them. Cecilia would back off and then raise her arms up, ready to fight as she waited for the bell.
_________________

Risako remained smiling slightly as Cecilia backed away, even though inwardly she swelled with pride at being called the best of the Wrestle Angels. "Then you'll have to keep waiting, Northman" she replied cooly. "I intend to show you today how a true queen does things." She raised her own arms up, watching Cecilia...and then, as the referee backed away, the bell rang.

Circling around Cecilia, Risako raised her arms, watching her opponent intently...before darting in for a classic tie-up! She wanted to see just how strong the Northern Queen was, and, as was only courteous, wanted to afford her opponent the same opportunity...
_________________
UNDERDOG'S KENNEL:

Cecilia smirked as she heard the words of Risako, she would shrug her shoulder's a little. " All you'll show is how to lose." Cecilia said with a soft chuckle as she backed up and circled the purple haired woman. Arms raised, ready to square off against the Queen of Queens....she would narrow her eyes and when she saw Panther Risako step forward....

The Swede moved forward, wrapping her arms up with Risako's, locking up with the Queen of Queens as she started to grapple with the angel! The Swede would start off this match by showing off her amazing might! That Northern strength of hers to try and quickly make Panther Risako backtrack straight towards the ropes and pin her there!
_________________

Risako gritted her teeth, half in a grimace and half in a smile, as she felt Cecilia's raw power surge against her. Slowly, she felt herself being pushed back by her powerful Nordic opponent. So far, Cecilia wasn't disappointing in the strength department, but she wanted to see what the other girl had in the way of skill.

Suddenly ducking below Cecilia's arm, Risako quickly tried to get behind Cecilia, twisting her arm painfully behind her back, before swiping at her boots for good measure to take her down to the mat! "If you're so full of yourself, Northman, then you should try to keep up," she purred.
_________________
UNDERDOG'S KENNEL:

Cecilia would grin a bit as she was pushing against Risako, the woman was no slouch in the strength department that was for sure, but when it came down to it she didn't hold up against the Swedish beauty, as she began to push back the Japanese veteran, hearing the skidding of soles against the canvas.

Strength wise the blond was superior it seemed, but suddenly Risako decided to duck in below and slip out of the lock up, caught by surprise as her arm was twisted behind her back like that into a hammerlock. Releasing a soft wince of annoyance and pain, as she then suddenly widened her eyes as her legs were swept out from under her by Risako's boot. Taking her down onto the mat.

Cecilia grunted out as she landed front first, her free arm was quick to move up behind the back of Risako's head and attempted to snag it, quickly pulling it downward to try and roll Risako off of her and onto the side of the blond, so she could try and roll into a grounded Side-headlock.
_________________

Risako smiled as she took Cecilia down, using her foe's strength and momentum against her and elegantly folding her arm behind her back, immobilizing her against the mat. This, of course, was just a warm up exercise: she had already gotten the measure of Cecilia's raw strength, but she wanted a measure of the Northern Queen's skill level as well-- and what better way to test that than by seeing how she reacted to some chain wrestling?

Very quickly, Risako got her answer as Cecilia snagged her head, bringing her down in a side headlock, pressing her unceremoniously against the mat. "Nnh...not bad," Risako said, still smiling through gritted teeth, grabbing for Cecilia's wrist and twisting both her body and Cecilia's arm. Hopefully, she would end up prying herself loose from Cecilia's grip and locking her in an armbar...but failing that, she would go for a simple plan B, wrapping her arms just below Cecilia's chest and rolling to the side, putting her opponent's shoulders on the mat for a sudden pinfall!
_________________
UNDERDOG'S KENNEL: