The trip to the arena had been an eventful one. The cab driver of course asked where she was going, and Zulime of course answered. His eyes went wide as he heard, and he asked her what sort of match she would be in. Zulime's long dark hair cast her face half in darkness, causing the white of her mischievous smile to stand out even more. When the Riverboat Queen told him, he nearly crashed the car. Zulime, a believer in omens and fate, took it as a good sign.

But that was out of her mind now that she was sitting in the light of the locker room. She had clad herself in her white bikini and sarong. Maybe she should have put on a bit more clothing to offer herself a little bit more protection, but that did not seem terribly sporting. And for a woman as obssessed with honor as Zulime was, that was tantamount to heresy. So even if she were defiled in the ring, she would have that to cling on to.

Whatever the case was, there was no going back now. The smooth rat-tat of her entrance music's drum heralded her introduction to the arena, and Zulime waved at the crowd as she walked down the ramp. They were pleasant enough, so Zulime found it approrpriate to be pleasant enough back, without overdoing it. She slid into the ring and backed into the corner.

A long cascade of her dark hair fell over her face. She didn't brush it from her vision. All she did was smile, that same mischievous little smile from earlier in the evening.
_________________
My Characters 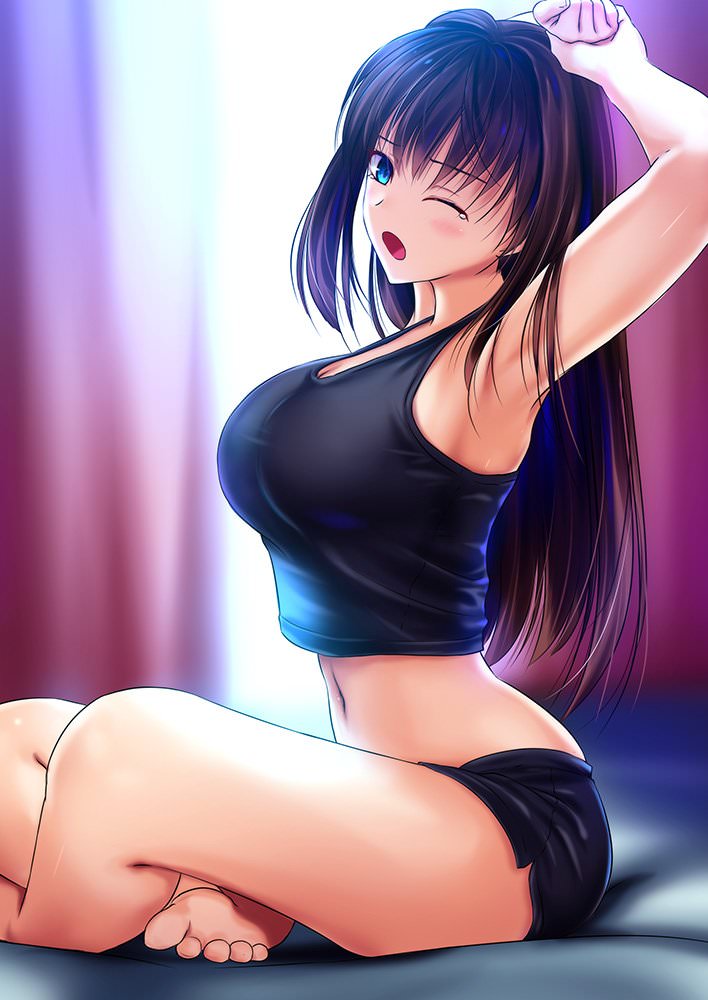 She made her way down the ramp and would move up into the ring, she watched the woman who stood before her as her opponent, she was pretty darn stunning. A beautiful lady, of darker skin slightly bigger than her, but of fairly even size still. Aoko would walk up towards the center of the ring and smile a little to her opponent. Looking to offer a handshake towards her, "Aoko Reinhardt, it's a pleasure to meet you." The actress would say in a polite manner to her opponent.
_________________

Zulime watched as Aoko came down. The Riverboat Queen could not deny that this woman was a looker. Her face was nothing short of stunning. Sure, she was not quite thick enough for Zulime's taste, but the Cajun girl could more than make do. She would have to, if she wanted to come out of this match with a win. As her opponent for the evening approached, Zulime smiled. She was not feeling particularly nervous.

Zulime slicked her hair back with great pomp before extending it out to Aoko. "Pleased to meet you, suga. My name is Zulime Lafitte. Ain't I just charmed?" She wondered if she was putting it on a little too thick, what with the Louisiana accent dripping with casual charm and the toothy grin that spoke of mischief, but Zulime had not come out tonight to play it safe.

Aoko Reinhardt moved forward and offered that handshake and it didn't take long before Zulime offered her hand towards her, they had a fairly kind greeting as they got to understand somewhat what kind of opponent they were up against tonight. Aoko would watch as Zulime spoke, that deep accent of hers getting Aoko caught up for a moment.

Though when the woman would release her hand and Aokko would see the referee move in towards the, she would start to back up a few steps. Aoko would smile and then drop down into a wrestling stance. " Oh, don't worry. We'll have a good enough time." Aoko let out as she would raise her arms.

As the referee would call for the bell, Aoko would gesture for Zulime to come at her! So they could hopefully start this match out with a simple lock up!
_________________

The pleasantries were out of the way now. There was something to be said for being nice to one's opponent, but you always had to keep your eye on the ball. Zulime's mission for the evening was to make this woman cum, right here in the ring. After accepting the handshake she took a few steps back to try and appraise the situation a little bit better. If she had to guess, she would say that she was a little bit stronger than her opponent. But there was about a 99% chance that she was going to say that regardless of who was standing across from her.

Seeing little reason to dally, Zulime brought her hands up and advanced on Aoko. Her hips moved gracefully to the right and left as she homed in on her opponent. Skin touched skin, and the Riverboat Queen did all she could to push her opponent back. Zulime was a proud woman, and she wanted this woman and the world to understand her strength.
_________________
My Characters

Aoko rolled her shoulders a little as she was getting ready to clash with the beautiful Zulime, she wasn't exactly sure what kind of a wrestler she was, but she could tell that she was in for one hell of a match tonight. Raising her arms up and watching as Zulime came towards her, the two beauties locked up!

Skin touched skin, as the two locked up and started to struggle against one another. It didn't take long before Aoko would feel her right foot slipping backwards a bit, slowly but surely she was pushing backwards as the Riverboat Queen looked to be the stronger woman.
_________________

Zulime kept coming forward. It took a second or two for Zulime to start tangibly pushing Aoko back, but once she got it she did not want to stop. A lot of Zulime's physical talents came naturally, but she was still going to flaunt them at every opportunity. Those thick legs of hers were not just for show, but she could not help putting on a performance. A dark smile spread across her lips as she felt her beautiful opponent giving ground.

Rather than let the situation linger on too long, she would attempt to get both of them horizontal, although in a way that was far rougher than what she usually did on Saturday nights. With a twist, she tried to toss Aoko down onto the mat and fall on top of her immediately after!
_________________
My Characters

Aoko was being forced backwards little by little, trying to hold her ground as much as she could, she would continue to try and push against the bigger woman, but she had no way to stop her opponent, she had just continue playing this game as she could try and figure out some way to get out of this spot.

Though she didn't have a whole lot of time to think, as Zulime soon enough grabbed a hold of her tighter and then slammed her down onto her back, with the bigger woman landing right on top of her. " Uugh!" Aoko grunted out as the weight of the taller woman pressed her down flat on her back.
_________________

Zulime was stout. That was one of her best features, she reckoned, and she was going to use it for everything that she was worth. She didn't have to work in the engine room often, but those nights were the most physically strenuous hours of her life. But she was grateful for them. For they made her shoulders broad and her legs nice and thick, which made her capable of pushing back woman like Aoko.

And she was going to use that. She attempted to seize Aoko's hands and pin them to the mat. A more scrupulous woman would have perhaps gone for some technical submission but that was not who Zulime was, nor could she summon up a submission from the blue like that. Instead, she opted to drape her large chest right in Aoko's face, smothering her.
_________________
My Characters

Aoko had expected to be overpowered, just not so soon...Zulime was after all bigger than her, and clearly a bit thicker in certain places. Making her the obvious choice when the question was who was physically stronger. The Actress would blush a bit as she felt the weight of Zulime push down upon her, and then suddenly that large rack of hers descended down onto her face.

The actress was now trapped in a breast smother as her wrists were pinned down against the canvas. She would shake her head, struggle and shift from left to right, trying to fight and move around to try and get out from under Zulime's beautiful bust.
_________________