Fighting Style: Crush, Kill, Destroy. What do you mean no killing? Fine... Stick with Crushing and Destroying. Renata is a monster of a woman with strength to match her terrifying appearence. In a match she will do her best to turn whatever poor woman/man had the poor luck to go against her into a rag doll, leaving them limp in her clutches as she presents her conquered foe to her Empress Jasmine.

"KNEEL!"
Grabbing her opponent by the throat, Renata lifts them into the air before reaching around to grab the back of their head, letting go with the choking hand to splat her foe face first into the canvas.

"Executioner's Noose"
A simple sleeper hold may not sound much like a finisher, but Renata will lift her victim up, still in the hold and let their legs dangle either off the canvas or off the side of the ring.

"Rainforest Rampage"
Starting from one corner of the ring, Renata will sling her victim over her shoulder, holding onto their legs as she turns to face the opposite side of the ring and charge. Lowering the victim mid-run they are crushed into the opposite corner from where they started from as Renata's momentum carries her through, spearing their mid-section. This can be done multiple times in a row until the victim is suitably finished

Bringing The Hammer Down: 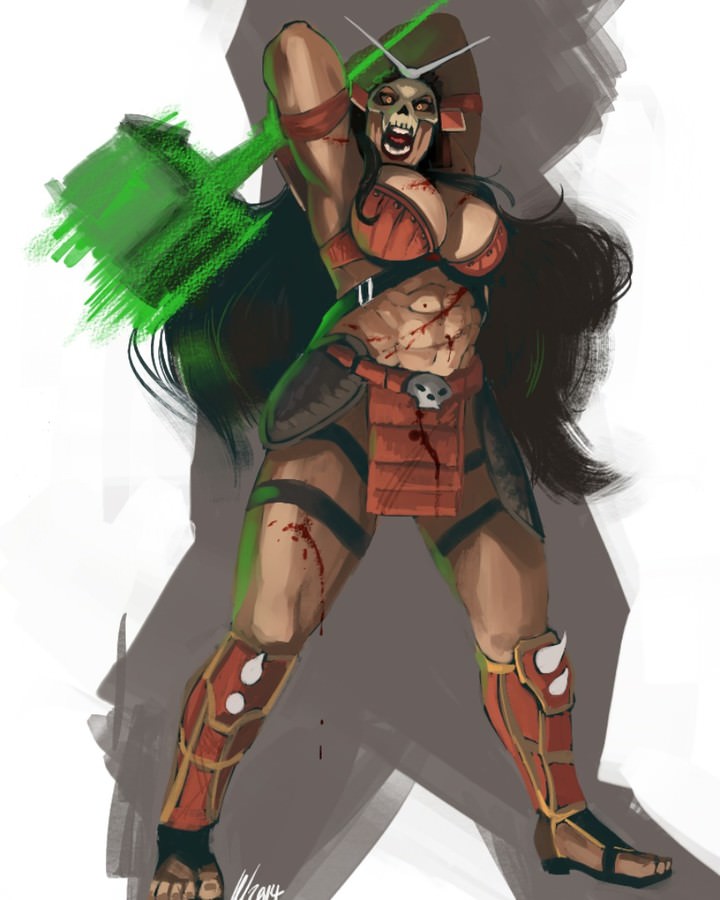 Personality:
While a ferocious monster in the ring, Renata is calm and composed outside of it, preferring to take a back seat in most affairs until a fight starts. She defers to Jasmine most of the time but there are some things that she will not do and will let people know it. There is a reason that in the rare times she fails to do something Jasmine is reluctant to punish her for it.

History:
Being the largest woman in school was not a pleasant experience for Renata Tavares. She was always the first person blamed and her big body made her a big target for bullying, knowing that if she retaliated it would be her who would be forced out just on principle. She picked up BJJ as a hobby but despite her immense strength her lack of flexibility held her back from the techniques and would always feel awkward about herself, feeling clumsy and unskilled even when smashing competition of similar size (often against men due to the lack of other women in her weight class). It wasn't until she met Jasmine Thorn did she start to come into her own: Jasmine had gotten herself in trouble with her poor Portuguese and general rudeness, so some of the other women in the BJJ class had taken it upon themselves to humble the Brit, no-one had informed Renata that Jasmine might have had the beatdown coming so the giantess quickly ended it, forming a sort of partnership with the older woman. While Jasmine seemed to control everything, the Emerald Empress' love of her own voice allowed Renata to sink into the background for once, to not be the centre of attention and not have fights start because of her, but end because of her. Feeling confident the duo took their talents and strength to the big leagues, AFW.
_________________
Adrian Kytes (Heel) Outspoken All-Rounder
Rebecca Tomko (Tweener/Heel) Amazon Enforcer
Sabine Shanoa (Face/Tweener) Dancing Succubi
Tina Armstrong (Face) Blue-Eyed Superstar
Yelena Turova (Face) Crushing Powerhouse
Pantha (Face) Pride of the Jungle
Anna Silver (Face) Ardent Angel
The Green Empire The Empress & Imperial Guard.
Mara Jingfei (Face) Amethyst Dancer