Search
Latest topics
» Refresher Course
by acuyra Today at 4:50 am

» Kaija Laine vs. Mariah Burste - Happy Anniversery
by acuyra Today at 4:27 am

While the others didn't, so what? Nobody will ever forget who Jake Roberts, Scott Hall, or Ted Dibiase are, and William Regal is probably the single most respected pro wrestler of all time, by fans and wrestlers alike.

Jinder winning the belt is a smart business move because it will draw fans from india and be good for their tv deals there. This is a business, and the decision of who gets the belt is a business decision. Am I happy with how his booking was for the last 7 months? Nah, but oh well. He's had a hot streak lately, he's beaten Orton, Zayn, and Styles, clearly he's not the same jobber he was as early as mania.
_________________
Check out the recently revamped Roster Page, now with pics! 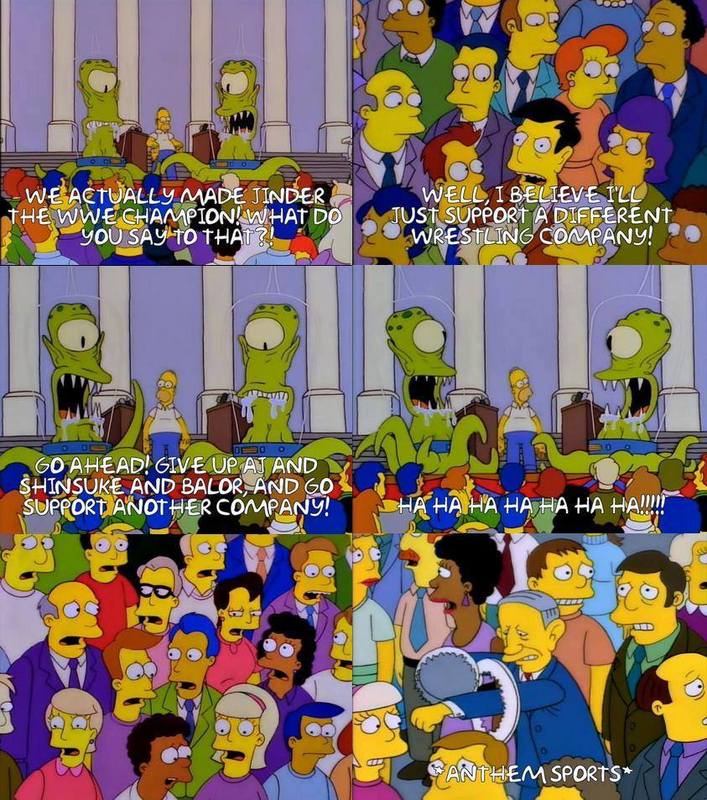 Without guys like Russo I am pretty sure that Vince McMahon would have turned WWE completely into a circus and we would watch garbagemen battle it out with roosters in little more than enlarged bingo halls.

Although I support the reign of Jinder despite it being there for the wrong reasons for non indian fans(cash), the Simpson episode was actually great by itself and in tihs kind it´s perfectly recasted.^^
_________________
Friction:
Tessa "Harrier" Price
Barb Wire(Tag Team)
Kelly "Pony" Flowers(Kawaii)
Anja the Raven
Amaya the Maiko(Kawaii)
Senior Officer Ise
Gina "the Brat" Lees