Name: Gozu Matsuya
Alias: Great Gozu, Former Super Elite Wrestler
Gender: Male
Age: 42
Height: 6'11
Weight: 308 lbs
Hair Colour: Brown
Nationality: Japanese
Alignment: Face (Don't confuse his Face alignment for any mercy in the ring. When he's in a match, he gives it his all. But be careful not to make him angry, cause the moment he's angry, he becomes the beast of heels!)
Skill Level: Hard-Lunatic "MOOOOO! You chumps better be ready to wrestle against the GREAT GOZU!"

Strategy: Gozu's main strategy in the ring is simple and has stayed the same for many years. Get hold of his opponent, and absolutely destroy him with his brute strength and iron will!

Finisher:
BULL SMASH!: With his opponent on his back, Gozu will climb up and stand on top of the top rope or a turnbuckle, before gloating for a moment, and jumping into the air, aiming a powerful elbow drop!

BULL CHARGE!: A straight up full-frontal drive-by. Gozu's sheer size is normally enough to knock out his foe, if not, daze them just long enough for his other finishers.

BULL DRIVER!: A jumping piledriver that transitions into a German Suplex after landing on the canvas.

Stats
Endurance: 10/10 "You'll never hear the Great Gozu give up! NEVER!"
Strength: 10/10 "You think you can match up with the Great Gozu!? I like to see you try!"
Speed: 5-8/10 "A bull never starts off fast. But the moment I get into motion, just try to keep up!"
Technique: 7/10 "I've been wrestling all my life, if you think I don't know my way around my holds, than I ought had forfeited the title Super Elite Wrestler!"
Flexibility: 4/10 "I might not be able to do splits and all that gymnastic stuff women can do, but I can still do a flip when I need to."
Hentai: 8/10 "Where the hell did you get that information asshole!?...My wife needs to keep that mouth of her's shut sometimes...grrr."

Great Gozu while he was in his prime!: 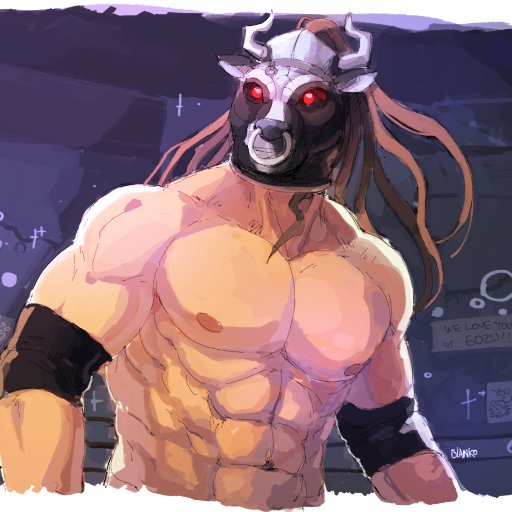 The Great Gozu is ready to take anyone on!: 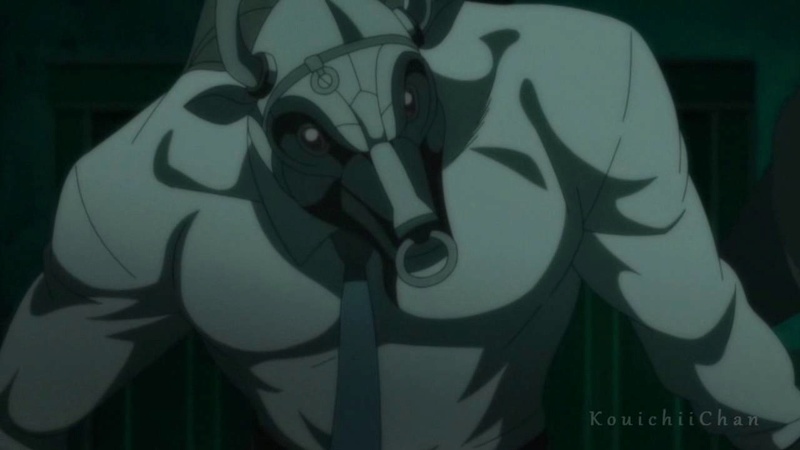 The Great Gozu is pumped for action!: 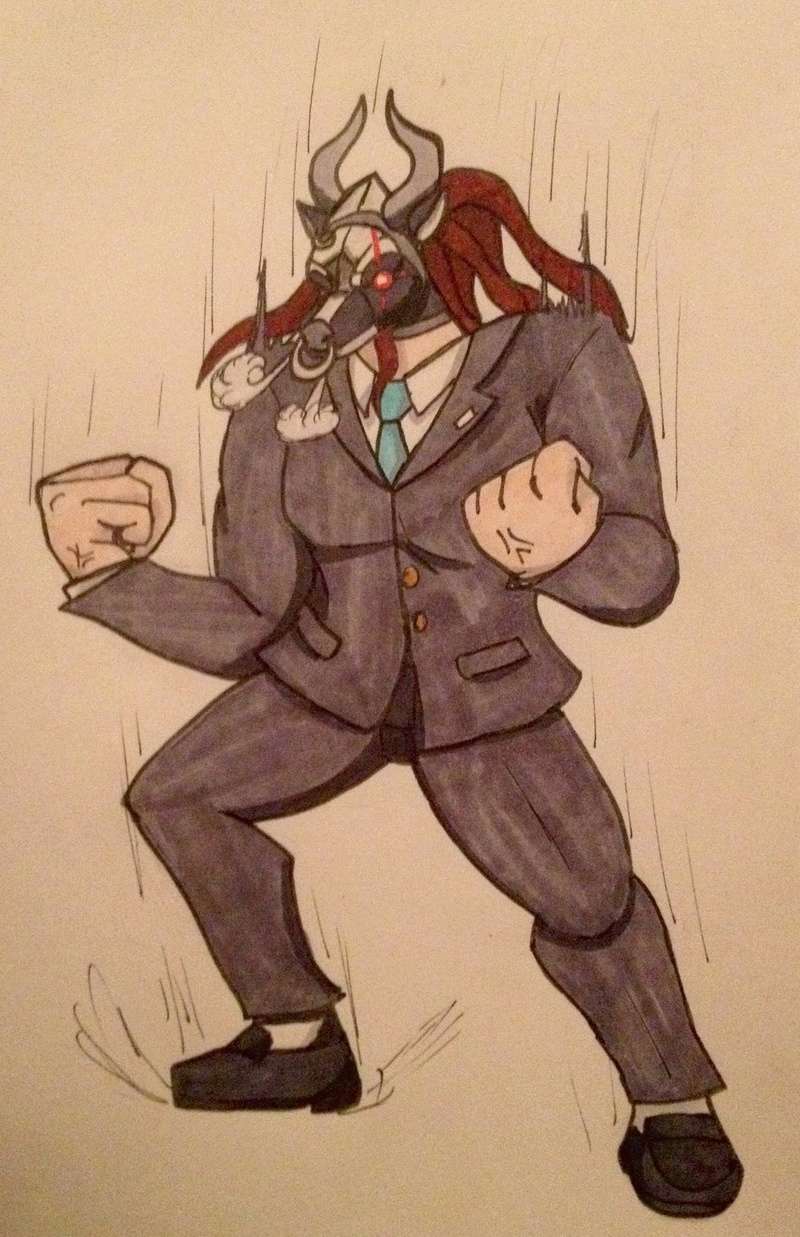 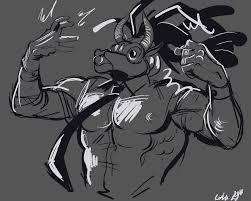 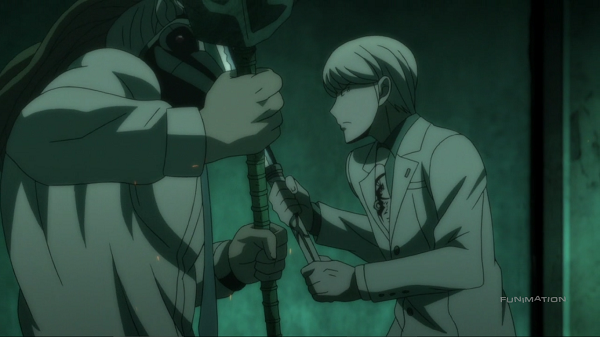 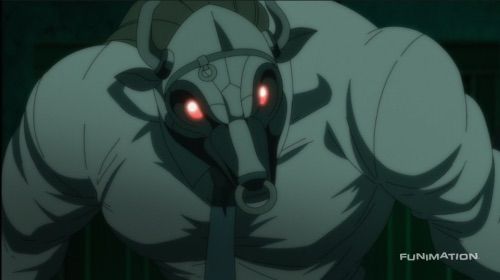 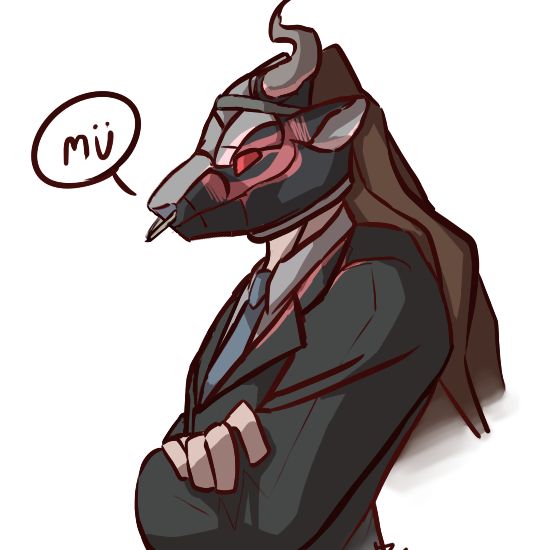 History
Gozu was always an outcast since he was a child. Due to his abnormal size, he was often made fun of, called a freak, an orge or evil giant. When he was in preschool, he was already around 4'3. Once he reached elementary school, he grew to be about 5'9. Once he reached highschool, he was 6'7. Due to his massive size, he gave off an intimidating aura, causing everyone around him to fear him, despite his gentle nature. He only ever wished to become friends with everyone but was shunned because of his size.

His only support he had were his parents and close friends but they could only support him so much. Going down a path of depression, Gozu had lost all hope for a normal life at a young age that is until he met his hero one day at a local market. He was in third grade when he first met his hero, his mother took him to buy grocery when he saw a wrestling ring set up in the market central. He was naturally drawn to the ring and watched from afar a large man wearing a bull mask wrestling with another man in a panther mask. The match was long and well fought but in the end, the man in the bull mask had won.

Gozu, filled with an unknown sense of joy and excitement, suddenly cheered and smiled with joy. The man noticed Gozu that day and approached him, asking if he enjoyed the match. Gozu, being a young but big boy, shook his head. The man laughed. For the first time in Gozu's life, he actually had to look up at someone because he was bigger than him. The man asked Gozu what his name was and chuckled when Gozu gave him his name. He would then introduce himself as the Great Gozu, his future mentor and predecessor to the name Great Gozu. The Great Gozu asked if Gozu wanted to learn how to wrestle, to which he eagerly agreed with surprisingly approval from his parents. It had been too long since they saw their son filled with joy.

Starting at the age of 8, Gozu trained with his mentor how to wrestle. Of course Gozu was a quick learner thanks to his big size. A few years later, Gozu was able to build up his self-esteem and self confidence thanks to the Great Gozu. Gozu started becoming more sociable and was able to make friends thanks to his mentor's help, after he was able to save his friends from a group of delinquents with his wrestling skills. One of the Great Gozu's first lessons was to always protect the weak and give them hope, and that's exactly what Gozu did.

But all good things must come to end. Gozu's mentor was caught in a horrible accident, that took his life. Gozu was completely devastated, destroyed, and fell into despair. The man he looked up to for so many years, gone. But the Great Gozu entrusted him with his will, a final wish. The Great Gozu was never able to accomplish this but he always dreamed of being the world's number one wrestler. Passing the mantle and name, Great Gozu, the Great Gozu died.

Gozu didn't know what to do for an entire month. But after a month, he received a letter from a special academy that catered to individuals with Super Elite talents, a school only for the elites of the elites. It appeared that his mentor had sent a registration form to the school, with his parents' permission, to send him to that school. Every graduate from that school always became a successful member of society.

Gozu was driven to tears, but he just couldn't do it just yet. He needed time to cope with his hero's death and decided to go back to school. While he attended the school for about half a year, he had noticed there was always a classmate missing. He eventually asked about the missing classmate and they told him she was an infamous Yankee who was extremely dangerous. His classmates told him it would be in his best interest if he avoided her at all cost but an odd feeling welled up in Gozu.

He took it upon himself to track his mystery classmate and eventually found her, Shirona Aido. He watched over her for several weeks, noticing that she was surprisingly similar to himself, someone who has lost their way in life and didn't know what to do. On the day he was going to approach her, he found her being ambushed and almost raped in a warehouse at the dock. Remembering his mentor's teachings, protect the weak and give them hope, Gozu acted. Right before the delinquents could have their way with her, he immediately jumped into action, easily defeating every single one of them single handily. But, he didn't leave unscathed. One of the bastards was able to slash at his back with a knife, leaving a small scar across his back.

After that day, he was able to convince Shirona to return back to school. It wasn't long before the two of them eventually began a relationship. A week after the incident, Gozu asked where did Shirona live since he never saw her return to her home. That's when he found out she was homeless and she told him her story. Not standing for this, Gozu forcefully persuaded Shirona into living at his house, not realizing how out of context it sounded. Finally caving in, Shirona ended up becoming a residence of the Matsuya family.

A year went by since the Great Gozu's death and Shirona and Gozu's first meeting, and Gozu decided to take up his mentor's mantel and dream. Shirona took upon herself to become Gozu's manager. Gozu took up the name of his past mentor and challenged several wrestling circuit and over the years, he raked up enough titles and belts, the name Great Gozu was regarded as possibly the number one wrestler in the world.

He and Shirona of course took a few years off to attend that Super Elite academy his mentor recommended since the offer never expired. The two were regarded as the Super Elite Wrestler and Super Elite Yankee, two of the best fighting students at the academy. After graduating, Gozu and Shirona returned to the wrestling world and participated all the tournaments they could find from local to world wide.

They had hit their peak until Gozu's tenth title defending match, Gozu announced he had to retire. It was due to some internal injury in his body but more importantly, for his new family. He had proposed to Shirona on their tenth anniversary, to which she accepted with joy. These events had happened 20 years ago. Now with creation of AFW, Gozu decided to return to the wrestling scene, this time with his family. And he will make sure the world will once again know the name, GREAT GOZU!

Personality
Gozu is a gentle giant with a strong sense of justice. While he was timid, and a coward when he was younger, he was able to become the man he is today thanks to his mentor. Gozu has a strong respect for wrestling thanks to his mentor's influence, and treats every match seriously. He is noble and would never stoop to low, dirty tactics that would disgrace the honour of wrestling.

But when in the ring, his gentle demanour disappears and is instead replaced an adrenaline-pumped man who is over enthusiastic, often giving off an aura that could boost anyone's morale though his profanity does get the better of him.

Though, if anyone ever harms his family, Gozu's personality completely changes to that of a wild beast, a wild bull. He will stop at nothing to absolutely destroy the person who brought harm to his family, ruthlessly beating them. The only thing that could ever stop him is the voice of his wife and his daughters.