This is a list/sign up thread for members who are looking for title opportunities/matches.

First and foremost, I have to say that if you are struggling to get on the title scene, the best way to go about getting some action is to contact one of the members that currently holds a belt and see if you can set something up with them (infact, you should at least try this before putting your name down in this thread)... Please remember that they may already have their own plans, or they may be willing to give you a shot but not to lose the belt to you... Please do not get too frustrated at this.


How this thread is going to work:
Post the character/s you'd like to push for a belt shots and which championship belt/s.. The more options/variety in belts you put, the better chance you have at being successful. I will then take these names as being possible contenders for the belts should a champion be struggling to find an opponent, or if we have some kind of event that might lead to a title shot (Please note that this list will not supersede plans that the current champion wants to move forwards with, it will simply be characters for consideration when there is no plans)

Please also note that this thread (if you are successful) will only get you some sort of title match/involvement... It doesn't mean that you will be handed the belt after the match from the current title holder (that is something that you will have to arrange in private). I will only contact you when there is some kind of opportunity available (or if your request is highly unlikely to be fulfilled)


For the time being, I would like to ask that you utilize this thread only if you have not yet held a belt in Friction or Tension (and you currently don't have plans already set up with a champion). Depending on the response, I may allow others (who have held belts) to sign up later
_________________
The new and improved: Kelsea's Karacters 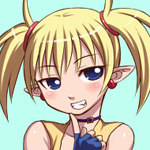