» Concerning lockdown and my state
by Iceman Yesterday at 11:36 pm

(As Anesthesia) Keep on Lifting Me by DJ Nageru
(As Dr. Cutter) The Cutter by Sota Fujimori

She’s also deceptively strong, and had little trouble lifting her opponents and demolishing them with painful throws.

As Dr. Cutter, her tends to fight more violently, and drops any pretense of subtlety. Her strategy remains the same, she merely becomes much more aggressive and brutal with it.

Counters, Submissions, Power Moves, with a splattering of eroticism when needed.

Endurance:★★★ - Fairly resilient.
Strength:★★★★ - Eerily strong for her height and build.
Speed:★★ - Not too light on her feet.
Defense:★★★★ - Is quite adept at countering attacks and turning her defense around.
Technique:★★★★ - A strong library of counters and submission moves. One might say she’s a ‘surgeon’ in the ring.

Strikes: ★★ - Not her best area - she has a strong punch, but landing it doesn’t come easy.
Submissions: ★★★★ - Has a good repertoire of submission moves to use.
Powerhouse: ★★★★ - Can and will throw around all but the heaviest of foes.
Aerial: ★ - Will readily admit that her dropkick is complete shit.
Counters: ★★★★★ - Is very adept at taking advantage of her opponent’s mistakes and punishing them.

Criminal Cutter
An inverted fireman’s carry takeover - here's where Anesthesia’s strength comes into play. She starts off by bending her opponent forward, stepping around behind them and lifting them under her arms with their front facing the mat, or simply lifting them off the floor from a facedown position. Anesthesia rocks her opponent back and forth, gaining some [momentum. From there she lifts her opponent on top of her shoulders into an Argentine backbreaker rack position. Finally, Anesthesia pulls her opponent on their neck, rises up slightly, and uses the motion to push them off her shoulders, flipping them to the mat on to their stomach.

Victory 'A' Clutch
With her opponent lying face down, Anesthesia grabs their left arm, steps over, turns full circle and falls on her back, flipping her opponent on their back along with her. From there, she scissors her opponent's arms with her legs and rotates her body, forcing them on their knees. Finally, Anesthesia pulls back on their right arm, compressing both of the shoulder joints. Complex, but worth it.

Flatliner
A tilt-a-whirl backbreaker with a twist - Dr. Cutter catches her foe, spins them around in a full circle, then drops them on her knee. After a moment to settle, she then brings her arm up until an axe handle and drops it on their chest with her full strength, sending a shock throughout their entire body.

Medical Bridge
Anesthesia bends her foe forward, hooks her left arm across their back, then places her left leg on the back of her opponent’s neck. After that, she falls on her back and rolls, forcing her opponent over on their back, as well. With the rotation complete, she steps over behind her opponent and moves into a bridging position, stretching out her foe’s abdomen and leaving them helpless.

Atlach-Nacha
While standing behind her foe, Dr. Cutter jumps and scissors her head. She then falls back, and hooks both of her ankles with her arms. She then pulls back on her with her legs on her opponent's neck, compressing their back and either making them tap out or fall unconscious if they’re too stubborn.

Personality: Cruel, cunning. Shows disregard for most others. Utterly confident in herself, her skills, and her beauty. Very intelligent. Loves the female body, almost to the point of obsession.

While Anesthesia doesn’t have a true split personality, she does act a bit differently when in her Dr. Cutter persona. Her goals and skills remain the same, but as Dr. Cutter she stops trying to be coy and tempting, instead opting to just beat the crap out of her opponents and viciously tear them apart. Anesthesia tends more towards psychological manipulation, whereas Dr. Cutter gets rough and stays rough.

History:
Little is known about Anesthesia's past before her debut in the Rumble Roses wrestling federation. Some say she was a flight attendant in a plane crash, and the accident altered her memory and attitude. Some say she's an evil scientist for a dark organization, using wrestlers to create weapons of war...somehow. Some even say she's an alien.

Notably, she does little to dispel these rumor.

Regardless,  what’s certain is that, when the mysterious woman appeared in the fledgling company, everything changed. The mysterious nurse skyrocketed to the top, lesser girls in the federation falling before her. Towards the end of the company's short life, it was rumored that many of the problems within the Rumble Roses federation were linked to her, though she denied these rumors any time she was asked about them. When Rumble Roses finally did sink, it was rumored that she had bought out the last remnants of the company. 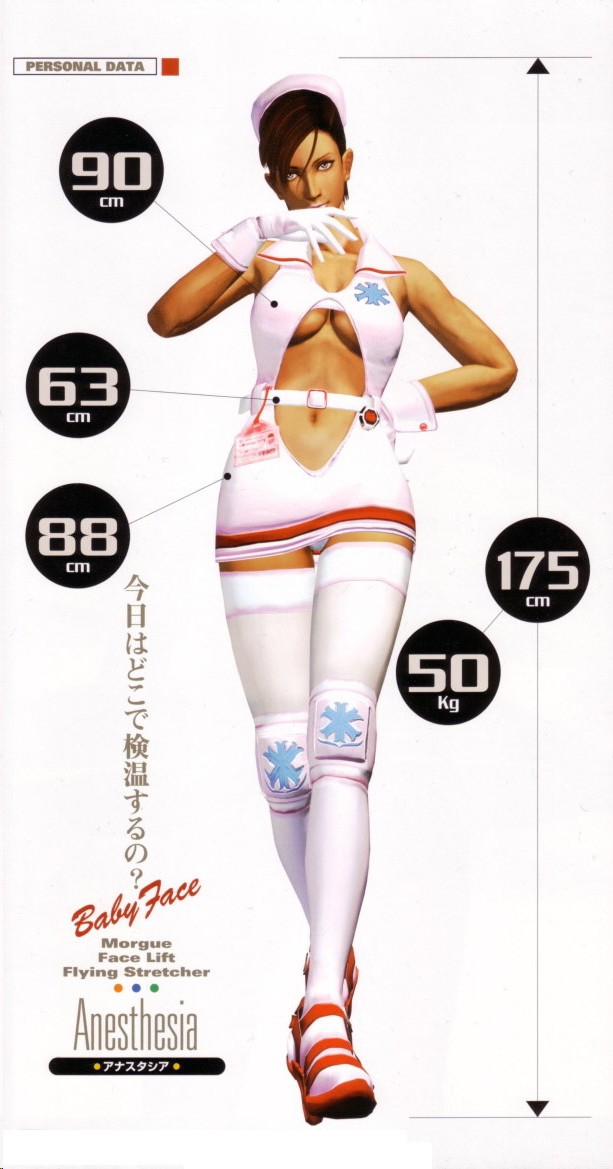 +This might surprise you, but Anesthesia is a lesbian.
+It’s very hard to determine what exactly Anesthesia is. Her accent has a British sound to it, but there’s a slight Latin flair as well. Her skin is just the right color for to be any of a number of races as well - it’s almost as if she was genetically designed to be as vague as possible.
+On the few occasion that anyone’s seen her doing something not wrestling related, Anesthesia’s been spotted in libraries, doing some reading. Apparently, she’s a very big Lovecraft fan.

This character has been taken by acuya with approval and permission from me.
_________________
Check out my character biographies here!