» Apologies for my Hiatus/Yet Another Returning Thread
by Mart-Kos Yesterday at 11:29 pm

» Bethany Maroza vs Kazuma Satou - A lucky performance!
by Deus001 Yesterday at 11:22 pm

» Erin Suzuki vs. Qin Liangyu
by Kelsea Yesterday at 10:26 pm

In the Fur n Feathers gym, two fighters were standing in the center of the ring, trading a couple blows with one another, more for training than actual fighting. "Nice, nice!!" Jack said, with his open palms absorbing the punches and a wide smile on his face, "Keep it up Lapin! You're doing great!!!"

To be honest, Jack was very happy to be able to spend time with Lapin. With all the matches he's been having, it was rare for them to spend much time together. But now he could make good on his promise to train with Lapin, and from what he could see, it was already paying off!
_________________
*sigh* Ok let me get the passcode.....all set, go on in!

"Phew.. You really think so..?" Lapin asked in her usual timid fashion as she stopped relentlessly attacking Jack's palms for just a moment, not waiting for a reply from her lover before resuming her relentless assault, determined to try and raise her overall skill level in any manner which she could, be it through after-hours training sessions like this or through asking more experienced wrestler numerous questions, the rabbit wanted to improve no matter what it was going to take. Feeling constant embarrassment whenever she was around other wrestlers due to her terrible loss streak Lapin needed to prove to both them and herself that she belonged here, that she could fight just as well as everyone else. 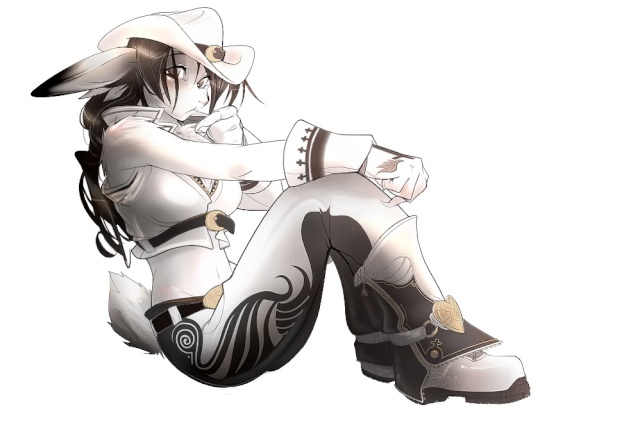 "I know so." Jack answered with a small smile, focusing on her progress and giving her the small pointers on posture and the placement of her fists. The two were so caught up in their training that they did not notice a stranger entering the gym, eyeing the pair with a hungry smile on his blue lips.

Sliker silently observed the two, his slime body allowing him the luxury of being stealthy. 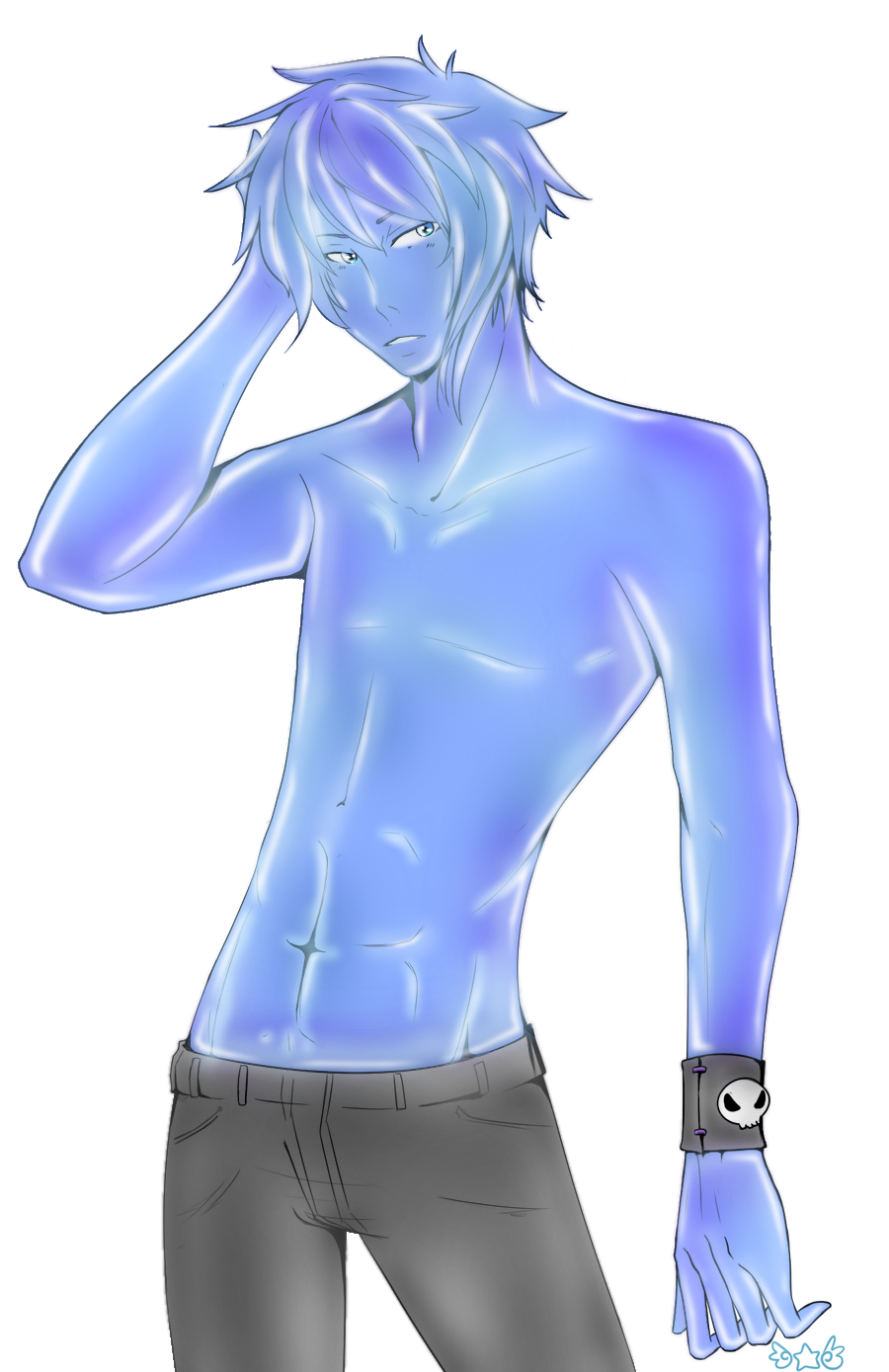 After a few minutes of analyzing the pair, he stepped into their full view, "Well well well.....a pair of rookies training together....making progress?"

Jack looked over at the blue slime once he spoke, trying to gauge what this guy wanted. He stepped between Lapin and the slime, "Who are you? I haven't seen you around here before."

Sliker gave an incline of his head, "The name is Sliker, and I was interested in perhapssparring against both of you."

"Hm?" Lapin hummed as the unknown voice spoke out, drawing her attention to the intruding slime which had managed to sneak into the gym unnoticed. The rabbit couldn't quite tell what it was about this guy but something was wrong, he gave off a pretty intimidating aura which made her increasingly nervous. However, she wasn't the type of person to just judge right away, maybe this guy was nice, she had to at least give him the benefit of the doubt.

"Aha, we aren't rookies but we are certainly making some good progress thank you.." Lapin spoke out nervously, offering a gentle smile to the stranger before continuing on. "That wouldn't be very fair would it..? I mean.. There are two of us.."
_________________
Fluffy Tail's Fluff Circle

Sliker simply chuckled though deep inside, his humor was only due to her naive belief that the two of them could take HIM down. Hell, there could be ten of them and Sliker could defeat them all. But as much as he wanted to feed, he needed to be patient, This was a job after all. A message needed to be sent, and he was here to send it....to ALL of Fur n Feathers.

"I'm sure we will be quite even in terms of skill." he lied smoothly, "Besides, it is just a spar. If the two of you work together I'm sure you can do it."

As Sliker slipped smoothly into the ring, Jack looked at her with a smile, "A spar wouldn't hurt Lapin. I'm sure we'll be fine. We can learn something along the way too, so there's a bonus."

Sliker eyes looked Jack up and down while the two of them were talking. Good form, full of spirit.....ohhh he was going to enjoy taking this one. The rabbit looked timid enough. First he would feed off of Jack, and Lapin would be too scared to move! Even if she chose to fight back, it's not like Sliker would be in any danger.

The slime settled into a ready position, while Jack motioned for Lapin to do the same.

"Yeah, you're right. It will just be a spar, it's not like anything bad is going to happen." Lapin sang happily with her own more confident smile becoming present. Jack's positive attitude and bright outlook on everything being enough to raise both her confidence and spirit, truly making her believe that this spar would be nothing but an enjoyable and informative learning experience.

"Not trying to be rude or anything but it looks like this guy is pretty soft as it is." Lapin whispered jokingly in reply to Jack while gradually entering her own more swift looking stance, preparing to trigger Jack's first attack in only a few moments. As confident as Sliker appeared the rabbit couldn't help but feel partially bad for him, he was about to be attacked by two experienced wrestlers and he had nobody to back him up, it felt quite unfair.

Trying to give Jack a good opening to attack Lapin abruptly sprinted straight past their shared foe, planning on bouncing off of the ropes behind Sliker before charging back at the slime, wanting to hit him in the back with a few quick strikes.
_________________
Fluffy Tail's Fluff Circle

Once the match started, Sliker could barely contain his excitement for his oncoming feast. First though, he needed to defeat them. His only concern was NOT knocking them out before he fed. He needed them awake.

He saw the rabbit rush past him for the ropes, but he was ready for her rebound, with his cold and slimy fist spearing into her stomach, no doubt knocking the wind out of her. Jack ran forward going for a punch to the slime's gut, when the fist met the flesh with a wet slap, absorbing the force of the blow with no damage being done. Jack gasped, only to catch an uppercut to his jaw, knocking him back. The force alone dazed him slightly, but he tried to shake it off, and push in for another attack. Depending on how badly Lapin was downed, he would alter his tactics from there.
_________________
*sigh* Ok let me get the passcode.....all set, go on in!

With her own momentum working against her as she received a vicious strike to the stomach Lapin released a choked gasp, fresh spittle flying from her mouth as she was knocked down, forced into a small coughing fit on the canvas as she tried to readjust herself, not able to properly take into account how badly Jack's attack had failed as well.

After her coughing subsided Lapin was ready to show this new guy that she meant business. With a burst of energy the rabbit leapt up from the mat, trying to hook both of her arms around Silker's neck to put him in some form of tight choke hold! The slime may have caught her off guard before, but there was no way that she was going to let him get away with doing something like that again!
_________________
Fluffy Tail's Fluff Circle

Sliker continued to move against Jack, catching him with a hard kick to the chest, sending the spirit slamming back first into the corner post. Jack cried out, slumping in the corner. The fact that this guy took no damage from his punches completely threw him off his game! Worse still, Sliker's hits were hitting home every time, and they were doing damage.

Sliker grunted when he felt Lapin's arms wrap around his throat in a tight choke hold. Instead of panicking however, the slime only smiled.

"Well done," he said to her as he felt her squeeze, "However, being a slime has it's advantages....one of them being that I don't need to breathe."

Smirking darkly, he ran back towards the adjacent corner, aiming to slam Lapin back first into the corner. He needed her down before he started to feed off of Jack. Better to put the more rebellious one in his place before the timid one.
_________________
*sigh* Ok let me get the passcode.....all set, go on in!

For a brief few moments Lapin thought that she had managed to catch Sliker, however as he effortlessly uttered the words 'well done' the rabbit knew that her plan had gone horribly wrong. Expression quickly switching to be much more fearful Lapin couldn't snap herself out of it in enough time to let go of her foe, meaning that she soon had a one way ticket to the closest turnbuckle, unable to do much but release a frightened squeak.

Entire form crashing back first into the corner Lapin instantly collapsed down onto her rear, limply drooping to the side as she just took a moment to try and breath. This guy didn't take any damage but was dishing out an insane amount of it. One thing was certain above all else. This was not a match which Lapin and Jack should have taken part in.
_________________
Fluffy Tail's Fluff Circle