Welcome, ladies and gentlemen to THE premier spectacle in aaaaaalll of wrestling! It's Avalanche time and we're here in the rugged and unconquerable land of Mongolia! We're going to get things introduced with a presentation of the beautiful culture of Mongolia followed by a traditional sumo match! Although it's Japan's national sport, there has been a growing culture of it inside this landlocked nation!

Now, here to present the opening ceremony and tell us a little bit about her home country, let's all welcome Mongolia's native daughter, Sarnai Khan! 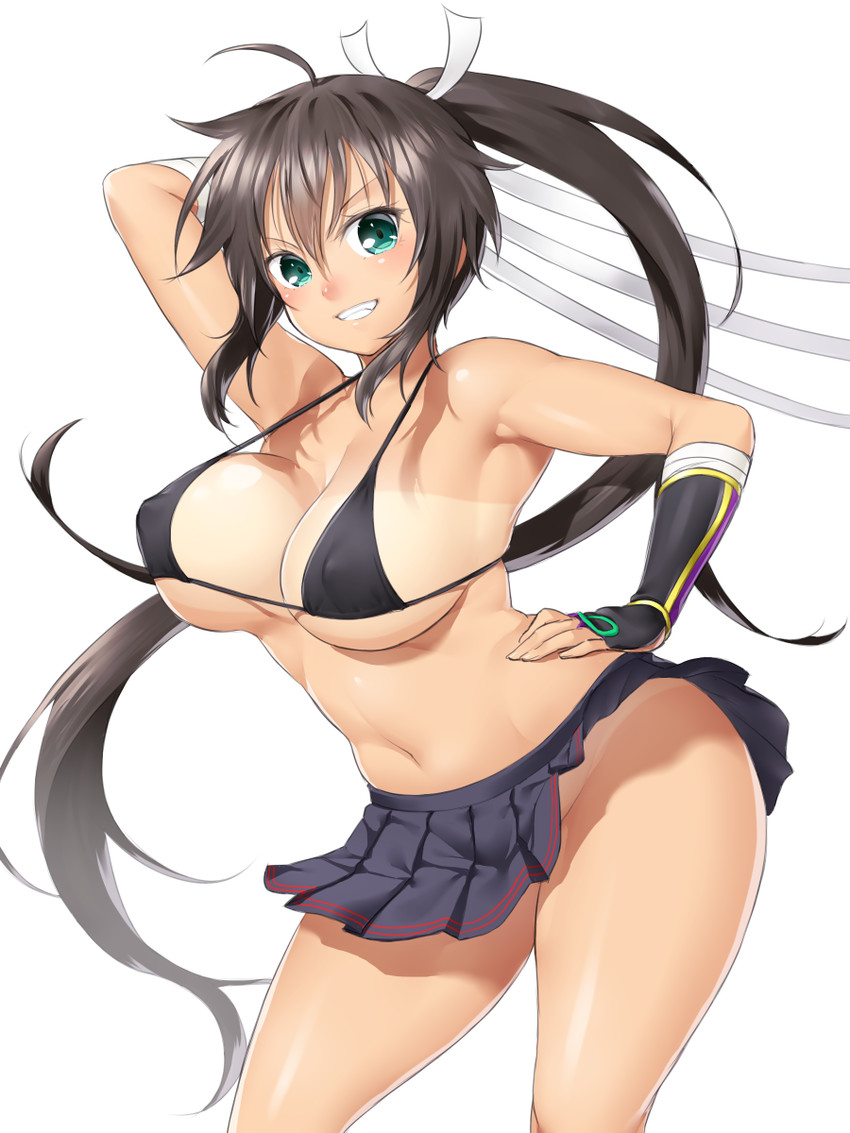 Sarnai was, for lack of better terms, extremely excited to hear that she was not only going to be the one person to start off the first event of Avalanche, but that she'd wind up spending it going up against her so far best friend and rival in the AFW. Of course, with excitement came quite a bit of anxiousness and fear, but by now, she had simply thrust aside all thoughts, especially as she now returned to her homeland to begin the ceremony.

As her name was called, Sarnai's theme blared out throughout the arena, and the young Mongolian triumphantly showed herself, immediately being met with cheers as she walked towards the ring, herself waving at the crowds. She was dressed in a yukata kimono, a more japanese tradition taken up by Sarnai, if only because of her sumo wrestling.

Of course, now it was time to address the crowds, having entered the ring and waved proudly at them, only bringing up Sarnai's own anxiousness under the surface. Of course, she kept herself under control, knowing full well she couldn't mess up here of all places, especially not with her own people watching her.

"Greetings, fans of Sumo and the AFW!" She began, grabbing a mic and speaking to the crowds around her. "I'm glad to both be back in my home country, as well as here, about to start this lovely event you've all been waiting all year for!" She tried to excite the crowds, seemingly working quiet well. "As the proud Mongolian people here know, Sumo, while not traditionally a Mongolian sport, is one that we have embraced proudly in the modern age. We've brought our own Sumo's up against those of Japan, where they've done extremely well against them in their own sport, often making their own country proud as they proved themselves to the Japanese and to their family back home. And that is why I am proud to be here in my own country, to prove myself before all of you, and to demonstrate that Sumo is a sport that anyone, regardless of race, gender, or nationality, can get into and do well in if they train hard enough and are motivated enough to bring themselves to compete!"

And with that, Sarnai removed her robes, revealing her rather flattering attire. A pink mawashi and bra, and little else at all, bringing the crowds to an impressive cheer when combined with her previous speech. Now, satisfied and happy with her performance, all she had to do was wait for her opponent to arrive, looking upon the energetic crowds as she did so.
_________________
*Insert obligatory character sig here*

Apologies once again for my leave of absence, I did not mean to be gone for so long, and I apologize for forcing people to wait.

Considering how she had spent her whole life within the borders of her native Japan, Miyabi had been nervous about traveling overseas for the first time. Even though her new best friend Sarnai had given her quite a bit of advice about traveling to Mongolia, and the two of them had even undertaken the initial journey together, the Japanese sumo girl couldn't help but be anxious as she walked through a completely foreign land, one which spoke a completely foreign language which she couldn't even begin to decipher. Even after almost a year of practicing, Miyabi still had difficulty speaking in English! Mongolian was something else altogether!

But, somewhat surprisingly, Miyabi found herself adapting quite easily to Mongolia. She managed to get by in her day-to-day activities with her pidgin English, occasionally pantomiming or slipping in a Japanese word if she was really having trouble transmitting a thought. There were plenty of cute girls built like sumo wrestlers for Miyabi to flirt with, but, beyond a few playful exchanges, Miyabi did not engage any of them for any significant period of time. Her mind was focused on Sarnai Khan, her friend who had come into her life hardly a month earlier, and who was now representing AFW to Mongolia as the official opening speaker of the Avalanche event! The Mongolian sumo had become very famous very quickly, and Miyabi was almost jealous.

Well, today, the two of them were finally going to meet in the ring! After their locker room tussle had ended something less than conclusively, Miyabi had been itching to go body to body against Sarnai in the ring! And here, it was a very traditional sumo match. Ironically, though Miyabi was a sumo specialist training under the most famous female sumo wrestler in Japan, Akashi Tanikaze, she had never fought in an actually competitive sumo match before today. But Miyabi wasn't worried. Sarnai was just as young as she was and surely did not have that much sumo under her belt. Besides, everything that Miyabi needed to win was in her brain! As Sarnai finished her speech, Miyabi would grin and, after pausing a beat, begin her own walk down to the ring.

Miyabi would wave to the crowd, who gave her a warm reception, albeit not quite so warm as the one which native daughter Sarnai received. The Japanese girl was wearing a yukata, like her opponent, one colored black with multi-colored flowers on it, and a red obi tied around her waist. She would climb up into the ring, and would very quickly stick her tongue out at Sarnai before undoing her sash and twirling around, tossing her yukata off in the process to reveal her attire: a navy blue mawashi and a matching bra!

<Hey, Khan-chan, do we have to wear the bras?> Miyabi would ask, as she tossed her yukata aside and basked in the applause of the audience. <Isn't it more, uh, authentic if we take them off? I kinda want to see your boobies again, too...> Miyabi did lower her voice for that last comment, so that Sarnai was the only one who could hear her.
_________________

After some more waiting, her opponent would finally begin her walk down the arena. Sarnai couldn't help but grin as she saw her friend once more turned opponent for the night walk down, her big beauty concealed by her yukata, though hopefully not for long. It was once Miyabi entered the ring itself that Sarnai was further pleased, glad to see that her 'rival' and she were to have their fight once and for all, and best of all, they were to have it in the opening to Avalanche.

"Hey Miyabi, looks like you've been preparing quite a bit for tonight, your belly's even bigger than before!." Sarnai taunted her rather playfully, placing her own hands on her nice belly, and sticking out her own tongue at the Japanese sumo in return. "As for the bras, well, I don't remember there being any rules that we had to keep them, actually, mind if I have the honors?" Sarnai answered Miyabi's question, all the while moving one of her hands to the back of her body,  already working on stripping herself of her bosom's only real protection from the crowd's eyes, just wanting a confirmation from her best friend. "We might as well please the crowd some more, not every day that they get to see two lovely sumos in the ring."
_________________
*Insert obligatory character sig here*

Apologies once again for my leave of absence, I did not mean to be gone for so long, and I apologize for forcing people to wait.

Sarnai did not seem to mind Miyabi's idea about taking their bras off—it was, after all, more authentic, seeing as how neither of them would really think of wrestling with bras on. While AFW often had to be careful with its PPVs taking place worldwide to ensure that they did not offend any local sensibilities, the audience—a good mix of native Mongolian fans along with a sizeable minority of Japanese fans who made the journey from their island nation to take part in the Avalanche festivities—would cheer still louder as Sarnai began to remove her bra, and that put Miyabi's mind at ease.

She needed to make one little change to the plan, though, as Sarnai reached behind her own back to begin to pull off her bra. <Hey, I do mind if you have the honors!> Miyabi would continue in Japanese, as she would bounce forward happily and reach around Sarnai's body, grabbing at the Mongolian girl's athletic bra, trying to swat away Sarnai's own hands in order to be the only one holding onto it. <I want to have the honor of showing off your boobies, Khan-chan!>

Miyabi would then unhook Sarnai's bra and try to step back and pull it off of the Mongolian girl. Miyabi really wanted to be the one to undress Sarnai, but, by the same token, she would then toss Sarnai's pink bra aside and turn around, looking over her shoulder and snickering as she wiggled her butt at Sarnai—and let Sarnai have an opening to take off Miyabi's navy blue bra, too.
_________________