Sligwan wants to discover more of the AFW building. He knows the ring, at least the Fur & Feathers division's ring. But what about the gym ? He has heard about a gym, in the backstage, where wrestlers could practice and spar together. Maybe someone is waiting there for a wrestler to spar with. The slime boy walks in the backstage and finds the gym. He enters. It's a wide room with several mats but no ring. All “monsters” from Fur & Feathers have the space then can wish in order to practice. Sligwan slowly walks in to see if someone is there. 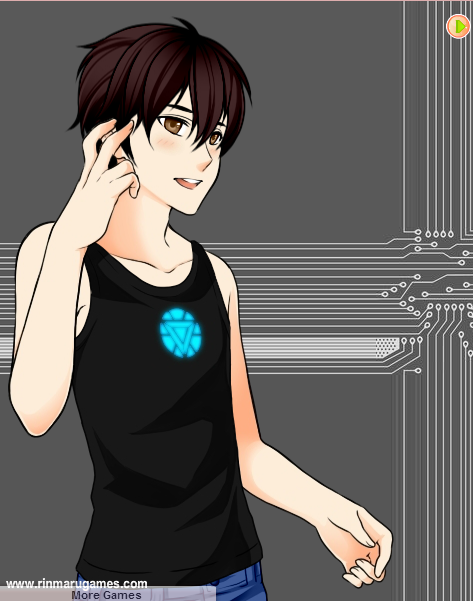 Dave was busy lifting weights in the gym. While not physically imposing, the young man was still lean and fit. Today he was participating in his usual exercises, where thankfully there were no more crazy women trying to ambush him. Thank god for miracles.

As soon as he heard the voice, Dave jumped in surprise, dropping the weights and leaping away from the sound. When he turned around, he was shocked to see a slime like being n the shape of a young man standing there with a grin on his face. Standing as still as a statue, Dave stared open mouthed at him, "U-uhh hi." he managed, still not believing what he was seeing.

In truth he had heard of the Fur and Feathers League, but only a little. Apparently they liked to keep to themselves and rarely interacted with the other factions of AFW. Dave had never seen any of them in person until today.

Sligwan smiles, a little bit embarrased to see the shocked face of the man. He doesn't like to fear anyone, at least not only because being a slime. Fearing an opponent in a match is something else, and that is good. But this man has no reason to fear Sligwan.
« My name is Sligwan. I'm new in the Fur & Feathers roster. I'm actually surprised to see a Human in this gym. Huh, well, I didn't want to shock you, sorry. »
_________________
My characters' sheets :
⇒ Caleb Golepodem
⇒ Tawncal
⇒ Sligwan
⇒ Yeldo
⇒ Jover
⇒ Raphaël Lancelin
⇒ Fizzy Dyle

"OH!" Dave realized, "I'm sorry! I thought this was just a random gym. I've gotten ambushed twice in the past week or so. I've tried to find a safe place to train without getting the unneeded bruises to go along with it."

Well at least Sligwan seemed friendly enough. Taking a few steps closer to the brown colored individual, he held out a hand, "Dave Blake, from the Tension division. Nice to meet you."
_________________
*sigh* Ok let me get the passcode.....all set, go on in!

Sligwan shakes the hand. Dave can feel the cold touch of the slime. He can smell him, a syrup smell, almost like sweet, though he tastes differently. Sligwan smiles.
« Ambushed ? Well, I understand why you wanted to be safe in mind. »
Sligwan takes a look around. There are weights, but also tools such as collars or handcuffs. Is that useful for practice ? The slime boy looks back at Dave.
« I was looking for someone to practice with. »
_________________
My characters' sheets :
⇒ Caleb Golepodem
⇒ Tawncal
⇒ Sligwan
⇒ Yeldo
⇒ Jover
⇒ Raphaël Lancelin
⇒ Fizzy Dyle

Dave smiled though he had to admit the feel of Sligwan's body was a bit cold. But the smell! It reminded Dave of maple syrup that he would have on his pancakes every now and again! He was gonna comment on it, but then saying something like "Wow you smell nice." would be a little off putting to a person you just met.

Sligwan smiles more as Dave kindly accepts to help him and offers to practice with him.
« Thank you, Dave. Well, what do you want to do ? I have nothing special in mind, I let you choose. »
_________________
My characters' sheets :
⇒ Caleb Golepodem
⇒ Tawncal
⇒ Sligwan
⇒ Yeldo
⇒ Jover
⇒ Raphaël Lancelin
⇒ Fizzy Dyle

Eyeing the ring near them, he gestured toward it, "How about a fun little wrestling match between us? Can you handle that Sligwan?" he teased with a wink.

Heading over to the ring, he jumped up, before removing his Iron Man shirt, revealing his toned, smooth chest underneath. He wasn't built like most males in AFW but he wasn't a weakling either.
_________________
*sigh* Ok let me get the passcode.....all set, go on in!