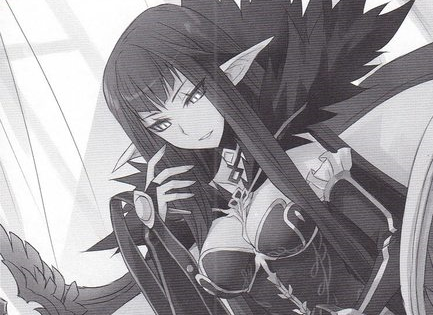 Sermis now look around at the Tension gym while wearing her wrestler uniform.  Though she was mainly a friction wrestler she would also do Tension matches as well, after all she couldn't resist the idea of fighting males and beating them in the ring.  This was something she had never done in the other wrestling leagues as they never allowed any intergender wrestling.  Suffice to say that Sermis was looking forward to her time at Tension, even if it would be a side thing compared to Friction.  It seemed that both the men and the women shared the same gym, not that Sermis had a problem with that.

After taking a few moments to look and inspect some of the equipment, Sermis would make her way towards a bench and started to lift some weights.  She would simply continue on with this for a while as she inspected everyone else here.  She kept an eye on both the males and females, as she had heard that Tension wasn't just guys verse girls, it was also guys verse guys and in some cases girls verse girls which was friction thing.  Thus it wasn't really guys verse girls, no instead it was everyone verse everyone.
_________________

At some point, Getsu, a young man in his early 20's would walk in the gym. He wore black sweat pants tightened around the waist by the band along with a navy blue sleeveless shirt, fingerless padded gloves, and short boots. The outfit showed off his toned but not over bulky physique quite well. He had a neutral expression as he brought in his bag, setting it down and not really aware of any others in the room at the moment. He walks over to a punching bag and takes a kick boxing stance, gaining a feirce predatory look in his eyes before doing a rythmic set of jabs, uppercuts, and powerful high punches at the bag, increasing with speed and intensity each time until he began to sweat and breathe a bit heavily, deciding to take a small break and gather his surroundings as his eyes wander and eventually land upon the black haired girl in the room
_________________
Character: Getsu Mikado
https://www.afwrpg.com/t12493-getsu-mikado

Sermis spotted another wrestler coming in, she had never seen him before.  Yes, there were many people here she had not seen in real life but most of them she had seen on TV when watching AFW.  There were a few others here who despite watching AFW for a while, Sermis still did not recognize and thus watch them a bit more carefully and this new person was one, thus she decided to simply keep an eye on him for a bit while she continued to lift weight for a bit longer.

After a few moments pass, Sermis would stop lifting weights and made her way to a bicycle where she started to peddle.  As she did, she realize that she had caught the attention of one of the male wrestlers she did not notice. "Greetings, how are you doing today?" ask Sermis as she continued to peddle on her bike while trying to stay polite and friendly.  As a wrestler she would probably make some kind of insult or rude remark but she wasn't a wrestling right now, she was simply enjoying the day and working out.
_________________

He smiles at her kindness and lack of any hostility he came to expect from potential opponents. "A pleasure to meet you miss. Im testing out this room for the first time. Im quite new here. What brings a lovely lady like you to the 'battlefield'? Its a nice change of pace."

He began to work out on a new machine as they began their conversation. He went to one where he pulls down on a bar weighted down over and over as he adds on more wvery now and then. This woman was quite fetching to him but he may have to get used to the feeling of it considering his new daily environment. He had plenty of self control but hasnt fought many women, let alone spent daily time arpund female fighters.
_________________
Character: Getsu Mikado
https://www.afwrpg.com/t12493-getsu-mikado

Sermis nodded at the words of the male wrestler.  She found herself in a similar position as well.  "Well this is my first time at the tension gym as well, thus I am as well testing out the rooms as well.  As for what brings me here, I want to face a challenge, the other wrestling leagues only treated me as eye candy.  I want a real wrestling match and if I can beat a few guys then it's all the better, though I am sure I will get defeated by several of them as well.  My name is Sermis by the way, what is your and what brings you here?" stated Sermis in a polite tone.

She then got off the bicycle and started to drink her water bottle as she then rested on the bench as she had work out a sweet.  So far the guy seemed nice, thus Sermis had no reason to be cautious or to be mean to him.  She decided to keep an eye on him as he he continued to work out.  She wondered how the other guys would be like, would they be nice like him?  After thinking about it for a moment Sermis came to the conclusion that some would be but others would be jerks and some would be something else all together.
_________________

"Well it almost sounds cheesey to say out loud. I was a sort of....vigilante. I was in a gang that fought others and beat up criminals so they could be officially arrested. Once my home town was in good shape and i realized how dangerous it was doing what i did, i had two options in my mind. Make a career out of catching criminals or use my skills to entertain people without risking my life often, so i found myself here."

The female wrestler simply listen to what the male wrestler had to say.  After hearing it all she nodded her head, it seemed the two had a few similarities despite growing up in different situation and he had a quality that Sermis like, he knew what hard work was. “In all honesty, I think their are wrestlers with far more cheesy stories, honestly your sound's pretty normal.  Mine I think is far more boring.  Anyways if you ask me, I think you made the right choice.  Just remember that in a ring your trying to knock out your opponent, don't go around breaking bones or anything.” she stated as she flick her hair to the side as she then listend to what else he had to say.

“Your assuming that these people can see anything besides what they want to see.  Luckily people who run this place don't seem to be blind, at least not at the moment.” stated Sermis as she thought about the other wrestling leagues she had been in.
_________________

"well the transition from home schooled rich kid to notorious gang buster was like a B rate movie. Im pleased someone like you happened to be my first encounter here. I am even tempted to ask you to dinner. And as for your concern, that was the main reason i switched from my kick boxing dirty fighting to mainly grapples and submissions."

He was quite pleased with his first interaction at this place, enjoying the company greatly. He drank more of his drink from the bottle he brought.
_________________
Character: Getsu Mikado
https://www.afwrpg.com/t12493-getsu-mikado

“If it is a true story and the rich kid end up becoming an actor or working in the movie industry, then guess what, you will win all sorts of movie rewards, I am bit of an expert on when it comes to movies.  As for meeting me first, well your just seeing me as a human, not a wrestler.  I think you would hate me if we first met in the ring, as my personality does change a lot, after all I am a heel.  Then again most people can't seem to separate their wrestling life from their real life, kind of annoying if you ask me.  As for dinner, why don't you get to know a bit better first before you decide.  It almost makes you look desperate.” stated Sermis as she smirk.  If she had been in her wrestling personality, she would have mock him for saying such a thing in several ways.
_________________

"It sounds like you have lived am eventful life thus far Sermis. Also dont take what i say at face value, i am a heel too but i like to keep things less hostile around anyone who hasnt earned my ire."

He would try yo keep most of what he said a bit mysterious and unsure if he was sincere or teasing someone. this of course didnt mean he doesnt find her attractive and pleasant so far, as he hasnt had much if any romantic experience, but the asking to dinner was truly mostly in flirty jest.
_________________
Character: Getsu Mikado
https://www.afwrpg.com/t12493-getsu-mikado