Search
Latest topics
» Prologue to Avalanche: A Rose and a Lily
by Jstruggs716 Today at 6:46 am

» Catching Up
by GreatForce Today at 4:16 am

» Bethany Maroza vs Natalie Cantlay - Royal Impressions
by Deus001 Today at 12:13 am 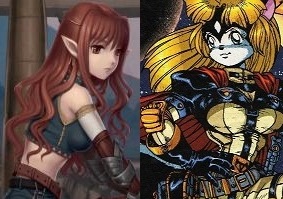 When Arasinya and Daisuke first fought in the ring as part of the Laser Shark Tournament, Daisuke managed to prevail though Arasinya did good herself against her. And much to the elf's surprise, Arasinya had been asked to face off against Daisuke again. Again? For what? Hasn't Daisuke already defeated her so that the elf will be eliminated? Nonetheless, Arasinya would accept and return back to the ring for another fight.

This time, it was for the championship belt and three different rounds would determine the outcome. Arasinya dressed up in her usual blue and brown woven warrior outfit, gloves, and boots before getting out to the front of the walkway where smoke came up to cover her appearance. When her music came up, she would appear out of it and started to perform her own eleven warrior dance with her staff, spinning it and hitting it down on the floor in tempo with the beat. Once close to the ring, she would toss the staff aside before flipping over the ropes.

She would finally get to her corner and wait until her opponent arrives.

It has been some time since her second round victory against John, but since then Daisuke hasn't heard anything about the continuation of the tournament. When she did get would that her next match would be for the title she was a bit surprised with who her opponent would be, but she was also pleased. Arasinya gave her a good run in the opening around and that one could have gone either way, still she was excited to get back in the ring again, and even more so against someone that she knew who could push her.

Nothing changed with her prep mentality other than the added knowledge that her opponent will most than likely make this an interesting one. The only noticeable difference on this day, other than the details of match itself though, is that her husband and King was joining the others. He joined Jill, Jenny, and Veldaris from where they were watching.

While he did not say it public, Sion was obviously behind his wife for this one. Nothing against Arasinya, he knew she was a good competitor and did like her, but given the situation he would find things to be a bit difficult not to root for his wife and Queen, but he would try not to root against Arasinya.

As the referee was reminding them what was at stake here and as well as the match format, Daisuke had a strong feeling chances were that this could very well go the distance, with how things went last time in the cage. Still, she didn't want to fall behind early, and knew a number of submission moves that could do her well here, but she knew nothing was guaranteed. When the bell sound Daisuke said nothing, but her body language screamed that she was ready to go.
_________________

Arasinya knew exactly what was at stake, but still she felt that there was so much that she didn't understand yet. She wanted her mind clear of questions before proceeding with the fight. So to do that, she had to quietly ask Daisuke. Once the bell rang, Arasinya got in her fighting stance and made her way to her opponent. Then, she would circle around her as she quietly said, "I don't understand, Daisuke. Why did they want me back in this tournament? You won fair and square and should be in the finals with another fighter that hasn't been eliminated yet."

After asking, she would offer up a test of strength by holding up her arms and hands in front of her. She was prepared to hold up against Daisuke's strength so she could prove herself in this fight.
_________________
Focusing on good old fashioned basics and just having fun. Nothing else and nothing more.

Part of her didn't get it either, but she had no complaints about it, still, she did hear to what Arasinya had to say about it. Dai put a finger on Arasinya's lips and tells Arasinya softly "We both know the answer to it." not wanting this to become a thing where either of them had any doubt about anything. Daisuke saw how Arasinya wanted to start off and was willing to do so, but just to mess with her any time Arasinya's hand came close to Dai's she would pull it away and quickly raise the other one. She does this about three-four times before finally locking hands with her.
_________________

Even with such an answer, it wasn't truly enough for Arasinya to be have full sense of the matter. She felt that Daisuke truly deserves to continue fighting in this tournament, not her. And yet, the company has asked her to fight again. Was it for publicity? Was it for a second chance? Either way, she must fight.

Arasinya was a little confused when Daisuke started to mess with her trying to grab the other's hands for the rest of strength. It took a few times before Dai finally locks hands with her and Arasinya would try to push forward against her.
_________________
Focusing on good old fashioned basics and just having fun. Nothing else and nothing more.

Daisuke had a feeling Arasinya would still be unsure of things. She did tell Veldaris earlier on that from what she heard the tournament just fell apart for unknown reasons. She didn’t know if it was due to other participants being injured, gone missing, or just withdrew altogether, but she knew there was still interest to crown a champion and while she can’t say for sure she was glad Arasinya was picked to face her for the belt, knowing Arainya will give her a good fight since their last one went down to the wire. Whether Veldaris told her that or not she didn’t know, but now was not the time to question it.

When they did lock hands Daisuke managed to get close enough to Arasinya while battling for position and whispered to her “Don’t doubt why you are here nor yourself. Show me and everyone that you deserve this chance.” She didn’t want to say anymore as it did take effort to both talk and fight for control as they continued to push each other.
_________________

(Really sorry about the wait!!)

Though she remained unsure and questioned about this whole thing, Arasinya knew Daisuke was right. She had to fight and prove that she deserves this placement for the title. Even if she doesn't win this, it'll still show that she is worthy for the big time.

With a clear mind and deep breath, Arasinya would exclaim, "Very well then, here I come!" And with that, she tried to push even further to get Daisuke down onto her knees. If this worked, she would also try to go on top of her opponent and sit to hold her down for the moment.
_________________
Focusing on good old fashioned basics and just having fun. Nothing else and nothing more.

(It’s alright, thanks for updating me on it)

Daisuke was hoping Arasinya would snap out of it and be like how she was during their first match up where there was neither visible nor verbal doubtage from Arasinya. While she was still going to take her just as seriously, Daisuke wanted her in the same mindset as well.

Daisuke appeared to get what she wanted as their communication contributed with Arasinya getting the better of her on that particular exchange. She did feel Arasinya wanting to get on top of her. While her back was on the mat Daisuke would struggle so her shoulders wouldn’t be touching for anything more than a one count. At one point she would trust part of her body into hers, hoping it would cause Arasinya to give some distance. If that happened Daisuke would roll in such a way that her tail would come up and whip itself in Arasinya’s direction so she could get back to her feet unchallenged.
_________________

Arasinya felt that she had the advantage when she got Daisuke on the mat. She wanted to push more so she can sit on top and give her a little ground and pound. But then, Daisuke would thrust her body upwards and it would catch the elf by surprise. She would immediately back away, especially trying to avoid that tail.

Once she had some distance, Arasinya would try to rush back in and attempt to give a haymaker punch to gain a point for first hit.
_________________
Focusing on good old fashioned basics and just having fun. Nothing else and nothing more.