Search
Latest topics
» Looking for matches
by skip-stop Today at 10:49 am

» Canon characters and pics checker
by Teenwrestler Today at 9:22 am

Mindy vs Daisuke - Rumble at the Gym!

Re: Mindy vs Daisuke - Rumble at the Gym!

Having grabbed Daisuke nice and tight, Mindy steadily rose from her low crouch, stopping in a wide, solid stance. It was a sight to behold, Mindy standing tall like that with her opponent slung so easily across her shoulders. She had to steady her footing to make sure that Daisuke didn't slip away with all his kicking, but apart from that she could probably lift him like this for a very long time. He was no different from a fleshy, very noisy barbell.

But she didn't intend to hold him for long, of course. It was getting harder to stay stable on her feet, as Daisuke recovered from the surprise and squirmed harder and harder. It was good thing that both Mindy and Daisuke wished the same thing, though! "Let you go? Alright, give me a second..." And she would just fall to the side, looking to slam Daisuke shoulder and neck first into the mat, before letting him go. "Hm! There you go!"
_________________

All other characters are on hiatus until further notice! 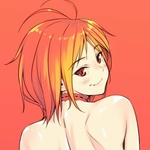 Re: Mindy vs Daisuke - Rumble at the Gym!

The wrestling prince was still stunned as Mindy managed to lift him up on her shoulder in a firemans carry position before rising up on her feet. The boys were in shock while the girls in awe, Mindy lifting Daisuke on her shoulders was a true sight to behold indeed as Daisuke himself was feeling a bit embarrassed at the thought of being woman-handled here. Still , he squirmed on top of her and kicked his legs out wildly but Mindy at him caught tightly and wouldn't let go- until she herself wanted to that is.

After a brief moment, Mindy fell down on her side to bring Daisuke down on his back with the impact really felt around the back of his head and shoulders. A loud *THUD* sound echoed a bit in the gym room as the two went down, Mindy's body also aided in the impact her body pressed down onto his with the fall. Daisuke let out a loud moan and bridged his body up after the impact, trying to roll away from his opponent. His body glistening in a light sheen of sweat now, he was beginning to realize that Mindy was a type of wrestler that he had never faced before- it was going to be muscle vs muscle in this battle of the sexes match.
_________________
Tension: