Strategy: A highflyer who likes to show off he'll try to find any way to keep his opponents grounded for his high flying game or unique submission holds.

Preferred Matches: Standard/submission are preferred but variety is the spice of life.

Flaws: , would rather break a limb or pass out than submit to a hold. Tends to focus on having fun in the ring rather the match at hand.

Has a very high pain tolerance, very hard to keep down.
Strength:

His time in the indies has made him a well toned specimen.
Speed:

Has a habit of not being where you thought he was a second ago.
Defense

Relies on his speed to avoid hits for a reason.
Technique:

Just as good on the mat than in the air.

Knows a few flashy takedowns but isn't his forte.
Aerial:

Once he starts flying very few can stop him
Counters: 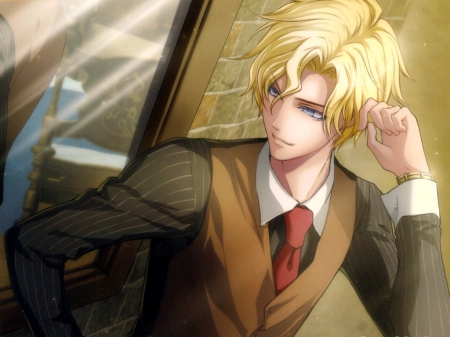 Personality: Inside the ring Alistair is an often witty loudmouth all in good fun as he just want to have a good time. If pushed Alistair can be as cutthroat as any heel in the ring although getting to that point may take some effort.

An enigma of sorts Alistair never forgets his manners especially around women but has a sharp tongue and isn’t afraid to use to bring someone’s ego down a peg or two. Seemingly always has a smile on his face will crack a smile even when things are at their worst. The very definition of an adrenaline junkie Alistair will do just about anything to feel alive whether it be fighting, drinking or the occasional one night stand. Alistair is very protective of his sister and will do anything to make sure she’s safe from harm.


Finishing Moves:
Shining Cross lock (Bridging double chickenwing) Alistair approaches a downed opponent He then stands over their back, tucks the opponent's arms under his armpits. From this point, Alistair  rolls into a bridge, pulling the opponent's arms and applying pressure on them cuffing his hands together to lock in the hold.

Up in smoke (springboard moonsault spike DDT)
Against a standing groggy opponent Alistair will grab them by the wrist and run full speed up the turnbuckle back flipping off it, while in the air he catches his opponent's head driving it into the canvas with a brutal DDT often knocking them out cold on impact.
http://www.gifsforum.com/images_new/gif/other/grand/f9243d07f0bd69c51ff2455a3f325510.gif

Background/History
Born with the name Adrian Ritcher, the only son of wealthy family in Denmark in line to be the heir of his aristocratic father’s legacy. However, Adrian was a rebellious child despite his noble-like mannerisms would often spar with his controlling and often abusive parents, has a complete disregard for anything to do with his family.
On day walking the streets of Copenhagen he discovered a local wrestling event He was completely enthralled by it the showmanship of the performers, the athleticism of the wrestlers and the roar of the crowd. Adrian started researching different styles of wrestling. Seeing it as a perfect escape from his boring and dictated life.

Adrian stole a modest fortune from under his family’s nose and joined a traveling wrestling promotion. Starting out as a simple jobber Adrian learned the trade sparring and jobbing with wrestlers all over the world he was in love with his new life but never got into any notable matches.  Until the owner of the promotion saw fit to give him a chance giving him the gimmick of a noble paladin-like wrestler named Alistair. Adrian came into his own as Alistair becoming one of the company’s biggest stars with his mixture of good ring technique and lucha libre high flying from his time with the Indies.

Getting so used to being called by his ring name and wanting to forget his forsaken family he changed his name to Alistair Vermillion after hearing about AFW from his estranged little sister Estelle whom he was still in contact with. He signed on to AFW to prove himself in a new environment.

Trivia
Absolutely adores animals particularly cats.
A chronic chainsmoker tends to smell like smoke when he enters the room.

Likes:
the "rush" of adrenaline
Showing off
Thumbing his nose at people he feels take themselves too seriously
Being submissive although he will fiercely deny it

Dislikes:
His birth name and family
The word "progressive"
Being patronized
People of authority