Preferred Matches:
Up for anything, but he likes special stipulation or hardcore matches.

Finishing moves:
Drop kick (if possible from top of the turnbuckle) in face.
Figure 4 Headlock 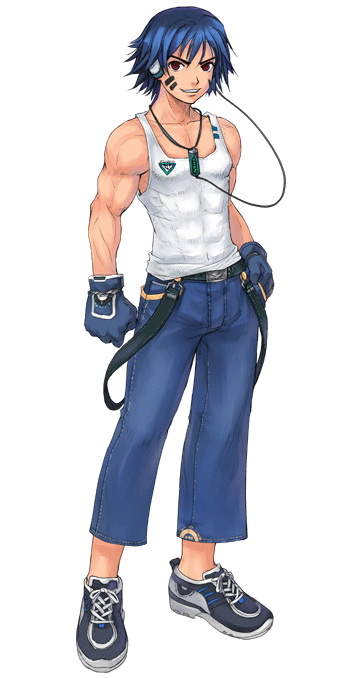 Personality:
Ralph is almost always happy and easy going. He's a showman and always love when crowd cheer for him, since the audince play big role on his performance. Silence around the ring can have negative impact on his success, while on other hand lot of support gives him extra boost during the match. That's the reason why he often perform crazy stunts in ring as well keep taunting enemies. It's double-edged sword, since this things can quickly backfire. But he has to keep doing this stuff. He love to be fan favourite and absolutely hate if others get bad opinion about him. Because he want to keep his image his fighting style is mostly clean; however, depend on circumstances and enemy he can perform some dirty tricks as well.


Past/History:
He was born in Germany and is only child in family. Parents owns a big company, so he could always get anything he want. As a little kid Ralph was always watching wrestling shows and his kid dreams was to become a proffesional wrestler. His mother didn't like his enthusiasm but father managed to convice her to let the little Ralph follow his dreams. When he was 7 years old he started training karate and soon became national champion in his category.

Few years later, parents company was involved in takeover and all family had to move across the ocean to the USA. While parents were busy with managing the company, he moved from karate to wrestling. He was good student and always willing to learn something new. With age of 18, he signed into collage wrestling league and while he wasn't so successful as with karate in early ages, he was still doing well. He was #1 contender twice, but the title always sliped away.

Although he was never champion in collage league, he always love to wrestle there. He was the bravest out of all competitors with all the crazy jumps and stunts he did. People began to love him and he loved all attention he was getting.

He successfully finished collage and he wasn't allow to compete in league anymore. Pursuing his dreams, he decided to apply to WWE. They declined his application but gave him one telephone number – they said it's great opportunity and that he shoult met with a guy. He called the guy and few days later personaly talked to him. He told him everything about AFW and how popular is this in Japan. After exchanging some more details, Ralph decided to give it a try – he moved over to Japan and signed to AFW


Wrestling Attire:
He's always dressed in white-blue colours when fighting. He's known for his white tank top with blue trousers, sneakers and gloves. He always enter the ring with his mp3 and headphones, however he fights without them.


Fun Facts:
He was almost expeled from secondary school because he was constantly taping posters with nude persons on teacher tables.

Re: Ralph »The Racker« Acker