Strategy: Get up close and personal.
Style: Grappling.
Type: Grappler.

Preferred Matches: She's flexible, as long as it isn't too hardcore.

Muff Tuft Muffler: A crotch smother, giving her opponent a face full of her rainforest, so to speak! The thick, brown fur is very good at keeping air out of her opponent's mouth, and protects her otherwise vulnerable crotch from nasty bites.

Momma Grizzly's Greatest Glomp: A powerful bearhug, used on a shorter opponent with the intent of trapping them in her cleavage while simultaneously smothering them out! 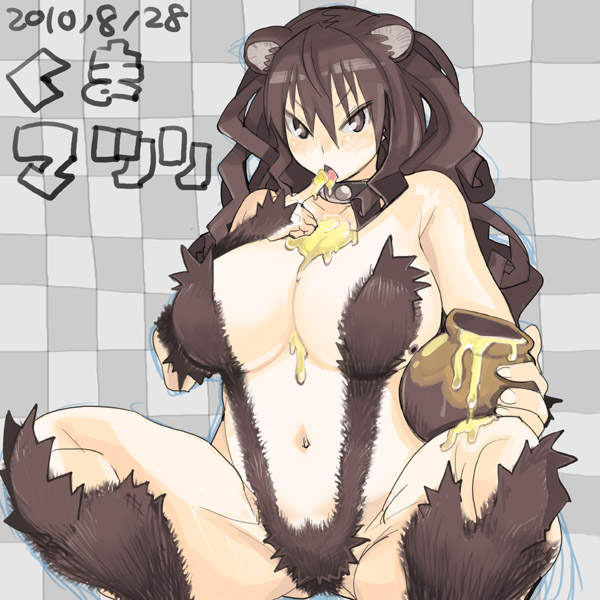 Physical Appearance: Grizzly is a tall, busty women, with bear ears and thick fur. It only grows in a very odd and provocative style, covering her knees and front of her legs, forearms, breasts, and crotch. She isn't sure why it grows in this pattern, but it doesn't bother her at all. Her fur provides a buffer against attacks made against those places, as well!

Personality: Grizzly is a massive tease, fond of playful banter with her opponents. She likes to put on a motherly act, although honestly, she isn't very mature! Outside and inside the ring, Grizzly is outgoing and friendly. She sleeps late, and is nearly impossible to wake up. She loves honey - sometimes, before a match, she'll pour some between her breasts as a nice 'surprise' for her opponents. She's fond of jokes and pranks, although she's less approving of them when they're on her. She joined the FnF's league because she wanted new people to flirt with!

She has a competitive streak, although it's often buried. Her physical assets, along with her race, allow her to outclass most of the opponent's she gets lumped with. It might be interesting to battle an opponent with strength to match hers, but Grizzly doubts she'll find one. She's entertained the idea of taking a few of her conquered opponents home for a little bit of play--a lot of people keep telling her that'd it be a lot of fun!

Past/History: Grizzly is from Urn, home to a wide variety of animal - human combinations. Life is simple there, and Grizzly lived in an area of Urn where there was seldom any serious conflict. She was known as both the strongest person around, as well the biggest flirt. She enjoyed challenging newcomers to impromptu wrestling matches, which usually ended with her opponent covered in hickies, honey, sweat, and being thrown over the triumphant Grizzly's shoulder. To the relief and disappointment of the towngoers, Grizzly went on a vacation to the FnF's league, wishing to see if she could find a cutie to bring home with her!

Fun Facts: Grizzly loves honey, pancakes, sausage and powdered sugar - she has quite the appetite, to boot!